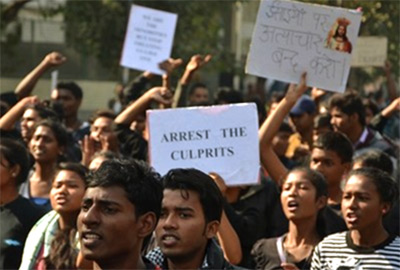 When the BJP first came to power in the late 1990s we heard of anti-Christian incidents perpetrated by members of the Sangh Parivar, the majority of which proved to be blatant falsehoods.

We need to recall those events to give a reality check to a similar campaign of unsubstantiated calumny that is raising its head again to discredit the BJP government, says Vivek Gumaste.

It stands out as a masterstroke of ideological gamesmanship; a Machiavellian exercise par excellence; a deceptive, cruel phantasma specifically conjured up to mislead the public, hijack the moral discourse in the nation and embarrass the government on the international front.

It is a ditto replay — the same suffocating hysteria, the same unsubstantiated hype and the same haste to condemnation.

When the Bharatiya Janata Party first came to power in the late 1990s we heard of anti-Christian incidents allegedly perpetrated by members of the Sangh Parivar, the majority of which proved to be blatant falsehoods deliberately blown out of proportion and distorted to gain political and religious mileage.

We need to recall those events to give a reality check to a similar campaign of unsubstantiated calumny (church attacks in Delhi) that is raising its head again to discredit the current BJP government.

Rewind to 1998 to review a much publicised incident involving the rape of four Christian nuns in Jhabua, Madhya Pradesh. Even before any details of this crime were available, major newspapers had conducted a trial, established the criminal guilt of Hindu organisations, and communicated this message to the country and the world at large by splashing this news across their front pages — a clear case of the press playing the part of accuser, judge and jury rolled into one.

It was left to Francois Gautier, the correspondent in South Asia for Le Figaro, France’s largest-circulated newspaper, who went to Jhabua to unearth the truth. This is what he wrote in theHindustan Times (February 1, 1999)”

‘This massive outcry on the “atrocities against the minorities” raises also doubts about the quality and integrity of Indian journalism. Take, for instance, the rape of the four nuns in Jhabua. Today the Indian press (and the foreign correspondents — witness Tony Clifton’s piece in the last issue of Newsweek) are still reporting that it was a ‘religious’ rape.’

‘Yet I went to Jhabua and met the four adorable nuns, who themselves admitted, along with their Bishop George Anatil, that it had nothing to do with religion. It was the doing of a gang of Bhil tribals, known to perpetrate this kind of hateful acts on their own women.’

‘Yet today, the Indian press, the Christian hierarchy and the politicians continue to include the Jhabua rape in the list of atrocities against Christians.’

A few days later, the home minister released a list of the criminals, a list forwarded to him by the Congress (whose leader incidentally happens to be Christian) government of Madhya Pradesh at that time: 12 of the accused were Christians!

Christian groups initially questioned this finding, but when confronted with irrefutable proof chose to ignore it. And the newspapers?

Yes, they reported it in some hidden corner of their papers following what has become an accepted strategy for some: Create hype, discredit your adversaries and finally when the truth comes out, report it in small print.

Other similar incidents confirm my view point. In 2000, a series of bomb blasts occurred in churches across Karnataka, Andhra and Goa. Again, without evidence Hindu groups were promptly indicted for these attacks. Eventually, it turned out to be the handiwork of a Muslim organisation, Deendar Anjuman with Pakistani links.

Despite overwhelming evidence to the contrary and glaring proof of a frame-up, our media continued to blame Hindu groups invoking a bizarre logic: ‘But it is clear that such organisations have become active in an environment of intolerance and bigotry that the Hindu Right is squarely responsible for creating.’ (Frontline, July 22, 2000).

Another series of church attacks in Karnataka in 2008 were investigated by the Justice B K Somasekara Commission of Inquiry which categorically stated: ‘There is no basis to the apprehension of Christian petitioners that politicians, the BJP, mainstream Sangh Parivar and the state government are directly or indirectly involved in the attacks.‘ (Clean chit for BJP, Parivar, Rediff.com, January 28, 2011).

While not denying the occurrence of some isolated anti-Christian hate attacks, an objective assessment indicates that the broader anti-Christian narrative was willfully orchestrated with an ulterior motive in mind.

With this past scenario as the backdrop, let us focus on the current spate of church attacks. In a hard hitting article, Rupa Subramanya (Crying wolf: Narrative of ‘Delhi church attacks’ Flies in the Face of Facts. Firstpost.com, February 16) after examining each individual ‘incident in detail and taking into account the facts available concludes: ‘There’s no evidence whatever that these six incidents in Dilshad Garden, Jasola, Rohini, Vikaspuri, Vasant Kunj and Vasant Vihar are related or part of a pattern of attacks on minority institutions.‘

She rightfully avers: ‘It’s also necessary to keep the nature and quantum of these incidents in the proper perspective. Crucially, it’s not just churches that are periodically vandalised alone, according to the Delhi police, 206 temples, 30 gurdwaras and three churches and 14 mosques were burgled in 2014.‘

Finally, she poses the million dollar question: ‘Why exactly are church leaders and their friends in the media so eager to establish there’s a communal angle to these recent incidents when the facts say the opposite? What are they hoping to gain? It’s irresponsible and downright dangerous if they promote their agenda in the face of the facts.‘

The rights of every Indian, regardless of her/his religious denomination, must be safeguarded. Genuine atrocities must be brought to the fore and addressed suitably to ensure a climate devoid of fear for that is what our country and our age old tradition is about.

But any campaign must be backed by the strength of truth and honesty. It cannot be a ploy to gain ideological advantage or a camouflage to pursue illicit conversions unhindered. We need to look through these old shenanigans.