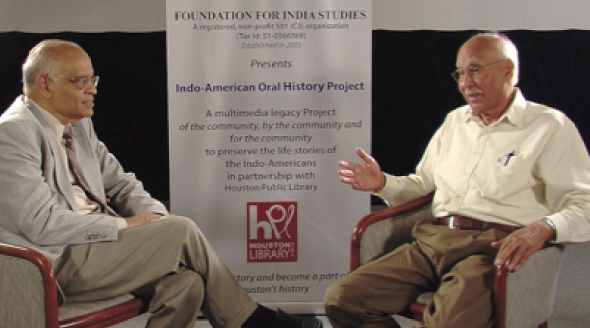 HOUSTON: Prabhat Chander Sharma requested that his interview begin with the invocation of Gayathri Mantra. It is understandable since, he is the President and co-founder of the Hindu Worship Society (HWS) which is located at 2223 Wirtcrest Ln, Houston, TX 77055.

Established in 1970, HWS has the distinction of being the very first temple for all Hindus in Houston at the time when Jay store was the only grocery store for all Indians. The Southern Indians broke up from HWS and built their own temple in Pearland which is called Meenakshi Temple Society (MTS).

Sharma was born on 23, January, 1938 in Lahore, Pakistan in undivided India to a physician father, Dr. Banarsi Dass Sharma and mother Promila Sharma. Dr. Sharma was a close associate of Bhagat Singh, a well-known revolutionary and freedom fighter in India’s freedom struggle. Bhagat Singh was tried and executed by the British. Bhagat Singh and his father, Dr. Banarsi Dass Sharma had co-founded an organization called Nav Jawan Sabha for young people to fight for India’s freedom.

Dr. Banarsi Dass was a product of National College in Lahore which was home for many freedom fighters and revolutionaries in those days. The college was not recognized by the British. Dr. Sharma left for heaven in 1941. Prabhat Sharma has inherited some of the revolutionary qualities of his father.

In the aftermath of partition in 1947, Sharma’s family migrated to Delhi, India just two months before Independence, and lived in refugee camps. He got free education because of his poverty status, but always excelled in education. He graduated from India’s premium institute, IIT Khargapur in Mechanical Engineering as one of the top 5 ranked students.

After working in Calcutta, he joined Bharat Heavy Electricals (BHEL), Hardwar in 1963 and was sent to Leningrad in Soviet Union for specialized training in Hydro Turbines, as a Graduate trainee. He became the Executive Engineer in 1966 and went on to become the Superintending Engineer. Being an activist, he contested and became the Secretary of BHEL Officer’s Club which had a number of Russians also as members. In a club event, when only the Russian anthem was sung and India’s national anthem was not sung, Sharma protested severely to higher authorities, which caught attention of the media and the issue was also raised in India’s parliament.

His superiors in BHEL did not like his activism and made his life miserable by setting un-achievable production targets. That was the time when he thought of leaving BHEL and moving to America. Being the only son, his mother did not like him leaving India. Asked why he only considered America, but not Russia, where he got his professional training, his response was that he came to America for better life and opportunities.
Being her only son, his mother did not want him to migrate. But she made the sacrifice and agreed to her son’s desire. Sharma says that his son thanks him for bringing him to America.

After arriving in Houston In 1974, he joined CE Lummus Engineering Company as a draftsman-designer, a job well below his qualifications, but soon rose up the ladder and retired as Manager of Mechanical Engineering in the company after 30 years of service.

Their children, son, Puneet Sharma and daughter, Puja Sharma were born in India and raised in America. Puneet is presently Vice-President in Modek Engg. Co., but unfortunately their unmarried daughter, Dr. Puja Sharma, who was a qualified anesthesiologist passed away prematurely.
Sharma candidly confesses that despite all the efforts of the first generation Indians to pass on their culture to their children sooner or later, everybody will be absorbed into the American melting pot, citing the example of his own son who married an American girl.

Sharma was married in 1964 to Jaya Sharma a B.A. degree graduate from Maharani College in Jaipur. She was born in Simla and raised in Delhi. She is a singer in her own right and sings Bhajans in the temple.

Indo-American Oral History project is an undertaking of the Foundation for India Studies (FIS), a 501(c3) non-profit organization registered in Houston, Texas. Video interviews of the first generation Indian immigrants will be digitized and archived in the Indo-American Oral History collection of the Houston Metropolitan Research Center which is administered by the Houston Public Library.