Balinese Hindus believe that the spirit of the gods is present in all things, from everyday objects to nature. For this reason, it is very important for humans to foster good relationships with the spirit world, and to remember to give thanks in the hope that the good spirits will bring fortune, prosperity and health to all the family. It is also necessary to appease the bad spirits so that they will stay away. 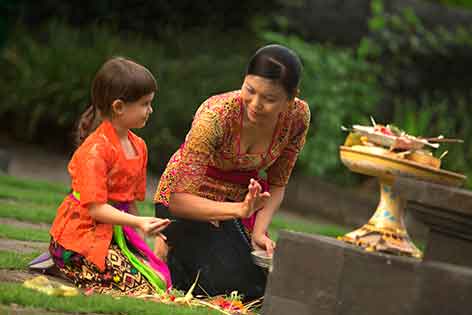 Offerings to the gods are an integral part of day-to-day life for the Balinese, and these offerings can be seen everywhere in many different forms.  You may even notice that some Balinese will pour a few drops of their first cup of coffee or tea on the ground before they drink any themselves as a small expression of thanks as well as to placate the spirits. Furthermore, when you walk down the street in Bali, you will most certainly notice (and possibly nearly step on) the many, tiny, woven palm frond trays that have been placed on the pavements and at the base of steps. These are so much more than mere street decorations, they are known as ‘canang sari’, and each is presented twice a day, with devotion, in front of every home and business, as well as at temples and shrines, on statues and even at crossroads to help prevent accidents.
There are a great many varieties of canang sari, but essentially each is comprised of a square frame, made with a folded coconut palm leaf and measuring about 10cm along each side. A flat bottom is woven, fitted, and skewered into place with either a sliver of bamboo or the central spine of a coconut leaf. Some baskets are very simple while others are more intricate artistic creations.
When completed, each little basket is lined with a banana leaf and filled with a symbolic assortment of rice, fruit, a coloured leaf or two, and flower petals of various colours but generally including red and white petals, as well as green in the form of shredded pandanas leaves to make up the colours of the Hindu ‘Trimurti,’ – meaning the three principal deities – Brahma, Wisnu and Shiva.  Some of the offering baskets might also contain a Chinese coin for prosperity and food items such as rice, peanuts or crackers.
Even placing the flowers in the offering trays involves a ritual, as one is not allowed to smell the flowers to be used in the offering, until the offering is actually made. A splash of perfumed oil completes the offering, and then an incense stick is lit and placed on top as it is the smoke that allows the essence (sari) of the offerings to reach the gods. There is a simple hand gesture known as ‘ngayab’ and prayers involved in placing the offerings, in which the right hand is waved three times to direct the essence or ‘sari’ of the offering.
You will often see women sitting on the doorsteps of shops or outside their homes with baskets of palm leaves and flowers as they create these miniature works of art. For special ceremony days and important celebrations, the offerings are much larger and more elaborate than the everyday ones. If you’re lucky enough to witness a Balinese ceremonial procession, you will see the stunningly crafted ‘gebogan’ mountain-shaped offerings of fruit that the women carry on their heads.
Learning how to make the canang sari offerings is an activity available to youngsters at InterContinental Bali Resort. Here, children of all ages can enjoy creative pursuits that will introduce them to Bali’s culture and artistic heritage