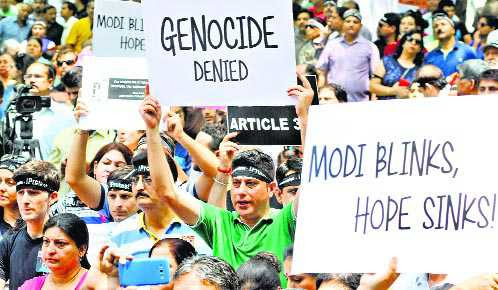 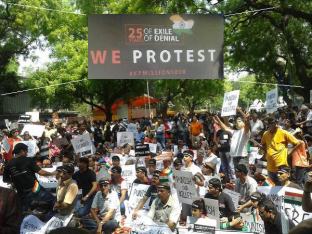 Ravi S Singh | Tribune News Service | New Delhi |  May 3, 2015:: Kashmiri Pandits today staged a protest in the National Capital against the government’s proposal to build “composite townships” for their resettlement and demanded action against those responsible for their “exodus”.

The protesters demanded a “separate homeland” that should be declared a Union Territory and falls under the Constitution of India besides being outside the ambit of Article 370, which gives special status to Jammu and Kashmir.

Demanding that the government must talk to leaders of Pandit-related organisations with regard to their resettlement plans, a Kashmiri Pandit said: “We want to return to our state on our terms, not on those who led to our exodus.” They adopted a resolution condemning the PDP-BJP government in the state for “unilaterally” taking a decision to build “composite townships”.

Punish those behind the Hindu ‘genocide’ and ‘exodus’ in Kashmir

Another protester said: “It is impossible for us (Kashmiri Pandits) to reside in settlements with the members of the community that was responsible for our exodus and ethnic cleansing.”

Through a separate resolution, they demanded a probe by a Commission of Inquiry under the Commission of Inquiry Act, 1956, with broad terms of reference, including the circumstances that led to their exodus. A protester said accountability should be fixed for the mass murder during the “ethnic cleansing” of their community. 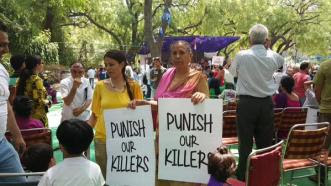 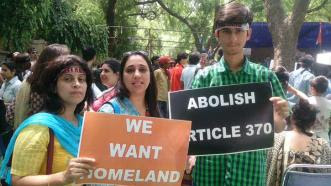 They also demanded that the state government reopens prosecution cases against all those involved in the killing of Kashmiri Pandits in the Valley following the outbreak of militancy in 1989.