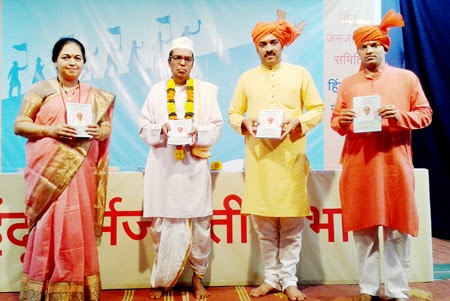 Walpai (Goa) : Hindu Dharma has survived aggressions by the ‘Shaka’, ‘Huna’ and ‘Kushana’ etc. all these years. It was possible only due to intense love and respect of our ancestors towards our Dharma; but we Hindus have now forgotten even self-respect. Hindus lacking self-respect are falling prey to baits thrown by Believers at Sadave, Goa. In Christianity, whoever manages to convert highest number of Hindus, is declared as Saint. Muslims are converting Hindus by force; they are kidnapping Hindu girls. We should foil their conspiracy of love jihad. Our country can revive her lost glory if every mother-power shows patriotism and be devout towards Dharma. Don’t send your children to Convent schools. Let us tell the whole world that the coming period will belong to Hindus.

The above appeal was made by Shri. Shivaprasad Joshi during Hindu Dharmajagruti Sabha (sabha) held by Hindu Janajaguti Samiti (HJS) at Shri Navadurga Sateri Mandir Hall, Thane, Satteri, Walpai, in Goa on 18th January. Sou. Jyoti Sudin Dhavalikar of Sanatan Sanstha and Shri. Satyavijay Naik of HJS shared the dais with him.

The ‘sabha’ was started with blowing of conch, recitation of ‘Veda-mantras’ and lighting of lamp by Shri. Shivaprakash Joshi. Shri. Prashant Chodankar explained to the audience various activities and drives undertaken by HJS.