New Delhi: Akhil Bhartiya Hindu Mahasabha (ABHM), a far-right Hindu nationalist outfit has been at the centre of controversy for raking up the issue of Nathuram Godse, the man who assassinated Mahatma Gandhi. The organisation that claims its origin to Hindu Maha Sabha (1926) wants to resurrect Godse and make present-day India aware of his contribution and “the real cause” that led to Mahatma Gandhi’s assassination on 30 January, 1948. The 45-year old Chander Prakash Kaushik, all-India president of ABHM speaks to Firstpost on Godse, reconversion, Hindu-Rashtra, etc

Does the Hindu Mahasabha want Nathuram Godse to be seen as a national icon?

Yes. We’ve written to Prime Minister Narendra Modi and Home Minister Rajnath Singh to install the statues of Nathuram Godse. If we can have a road in the name of the atrocious Mughal ruler Aurangazeb, why can’t we have one on Godse? If the government refuses, we’ll install Godse’s busts in all our offices in the state headquarters across the country. We’re also planning to release a film on patriot Nathuram Godse on 30 January, next year.

Don’t you think invoking Gandhi’s assassin is akin to blasphemy in our country?

We’re not speaking against Gandhi. We’re highlighting the sacrifice and contribution of Godse, who was projected as a ‘killer and a villain’ by the Congress, the party that relegated several of our freedom fighters into oblivion. Intentionally, a negative image was created against Godse by the then government. He was a patriot, freedom fighter, an editor, and not a criminal. He’s a martyr and we want the people of this nation to know the truth that compelled Nathuram Godse to assassinate Gandhi. Let me remind, the former Chief Justice of Punjab, GD Khosla, who heard Godse’s appeal and sent him to the gallows, mentioned in his book that the people had a strong sentiment in favour of Godse and if public had been the jury, he would have been a free man. 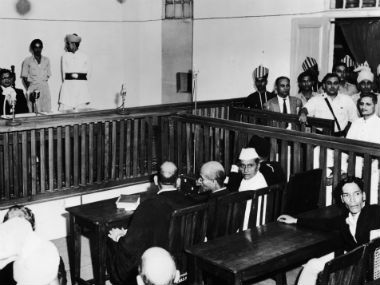 What’s your view on the reconversion or ‘Ghar vapsi’ of Muslims and Christians?

The issue of reconversion doesn’t arise. In India, there’s no original Muslim. If one tracks their genealogy, one will find that they have the same ‘gotras’ (clan or patriline) as we Hindus have. It shows they were originally Hindus. Take the case of Congress leader Ahmed Patel. Does an original Muslim suffix ‘Patel’ to his name, which reflects a Hindu caste? Unfortunately, there a few politicians, who have been politicising this issue for quite some time.

Do you agree that reconversions are done forcibly?

This is a rumour spread by the politicians. ABHM never converts anyone forcefully. We give people Gita, Quran and other religious scriptures to read, and they take the final call. Hinduism is a ‘Sanatan Dharma’, an eternal religion’, unlike Islam or Christianity, which is a sect. Hindus never forced anyone to get converted into Hindu fold. And, no one can prevent a Muslim who wants to get reconverted into a Hindu. We explain them the difference between the two religions – the good and the bad. Everywhere, we see in the name of ‘Holy Jihad’, innocents are being killed irrespective of their religion and caste. Even, children are not spared. It’s the Muslims and the Christians who forcefully converted the Hindus in our country.

Have you set any target and deadline to reconvert Muslims and Christians into Hindus in India?

We have no target or mission of any kind. It was Dharm Jagran Samiti that announced a target of making India a Hindu Rashtra by 2021 through reconversion, and we don’t have anything to do with them.

Do you think that those who get reconverted get their due in the mainstream Hindu society?

If it’s not so, it’s due to the government and its policies that reconverted Hindus are denied acceptability. But, during conversion, ‘Shuddhikaran’ (purification) is done and the person is taken into a ‘gotra’.

Why is the intellectual class vehemently opposed to the activities of Hindu groups?

It’s due to the mentality developed over the last 65 years under the Congress regime, which always made a Hindu feel alienated in his own country. It’s the politicians who made it so. As a result, often an Indian shy away from calling India, a ‘Hindu Nation’.

Under the two-nation theory, the Partition took place and Pakistan was formed as a separate country for the Muslims. Don’t you think we are headed the same way?

This will never happen in India, because this country accepted everyone irrespective of religion, caste or origin. So, is with Hinduism, which is an all encompassing religion and has accepted every faith and belief. It’s these politicians who decided everything in the Parliament and thrust upon the people of this country. Has the public ever been asked about its choice? India has always been a Hindu nation, and it continues to be so. No compromise on this issue will be accepted. Let’s not forget it was due to Gandhi that the Partition took place and he asked the then Indian government to pay Rs 55 crore to Pakistan as compensation. Why so? Gandhi’s presence led to several communal riots like in Noakhali, where thousands of Hindus were massacred, but he went on to support Muslims. He recited Quran inside a Dalit temple, but did he recite Bhagwad Gita inside a mosque or church? Why should Gandhi be called – Rashtrapita (Father of the nation)?

Is the Bharatiya Janata Party going to support you on the issues of Godse and reconversion?

Neither we’re a political party, nor contesting any election. We don’t need any support from any political party. The unfortunate part of BJP is that its Lok Sabha MP, Sakshi Maharaj hailed Godse, but after succumbing to pressure from “secularists” took a U-turn. Even, the BJP used Syama Prasad Mookerji as party’s slogan (Jahan hue balidaan Mookerjee, woh Kashmir hamara hai), when it came to Kashmir; but how many in the party know him or recognise his contribution.

Will you take up the issue of Dr Syama Prasad Mookerjee, who is said to have not got his due?

This issue hasn’t come up yet, because Dr Syama Prasad Mookerjee was already the president of Hindu Mahasabha, who later moved out and formed a new political party — Jan Sangh, a predecessor of today’s BJP.