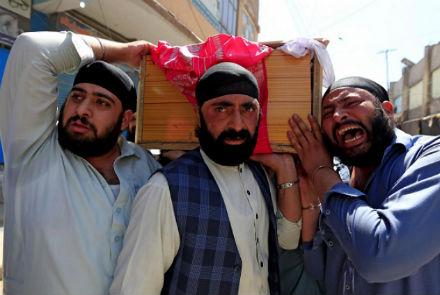 A council of Afghan Hindus and Sikhs refugees in Europe in an open letter to President Ashraf Ghani has urged him to issue a special order for probing the suicide attack in Jalalabad city in eastern Nangarhar province that targeted a gathering of Hindus in early July.

At least 19 people were killed and 20 others were wounded in the blast.

A copy of the letter obtained by TOLOnews shows that the Hindus and Sikhs community has raised concerns over the loss of their properties in Afghanistan and have marked Jalalabad suicide attack as a starting point for animosity against the minority group.

“Jalalabad incident which took the lives of dozens of Hindus and Sikhs cannot be a random incident. The Hindus and Sikhs were waiting for the president for three hours, and finally they become victims of a suicide attack which claimed the lives of 19 leaders of the religious minority and wounded over 20 others,” the letter read.

They have criticized Afghan embassies in Europe over lack of cooperation with the community, saying that those Hindus and Sikhs who have left Afghanistan are not holding Afghan identity cards.

“Afghanistan embassies in Europe are doing nothing for us without identity cards. This has changed into a big problem for Afghan refugees, especially for Afghan Hindus and Sikhs. A special solution should be sought in this regard,” the letter read.

The Hindus and Sikhs have also criticized government forces over a late arrival at the attack scene in Nangarhar to help the victims.

“At least one hour passed following the incident until security forces and medial help arrived at the scene,” the Hindus and Sikhs said in the letter.

They asked government to issue an order to Afghanistan security agencies to maintain security of Hindus and Sikhs’ temple and the areas where they perform their rituals.

Khalsa, who not only led this minority group in the country, was also the only parliamentary candidate from this community for the upcoming parliamentary elections.

According to reports, in the past Afghan Sikhs and Hindus played an important role in society and particularly in the economy.

However, statistics show that around 99 percent of all Afghan Sikhs and Hindus have slowly left the country since the start of the civil war.