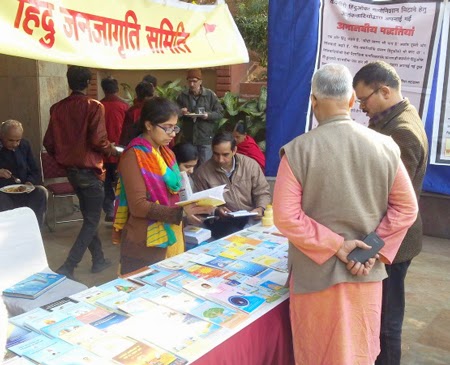 New Delhi : In this country, all mass media and the Indian rulers rush forward to offer help if a person from minorities faces slightest trouble. In the same country, Hindus displaced from Kashmir are leading life full of hardships for the past 25 years but nobody is paying attention. It is very unfortunate, stated H. H. Charudatta Pingale, the national Guide of Hindu Janajagruti Samiti (HJS). It has been 25 years since Kashmiri Hindus had to leave Kashmir because of attacks by jihadi terrorists. On this occasion, an organization called ‘Youth for Panun Kashmir’ fighting for just rights of Kashmiri Hindus organized a program at Arya Auditorium in Desraj Campus, New Delhi called ‘Vanavasi Chetana Aur Punrutthan ke 25 years (Exiled Consciousness and 25 years of Revival)’. He addressed this program.
H. H. Dr. Pingale said, “In Dwapar Yuga, Pandavas had to face exile for 14 years and Kashmiri Hindus are facing the same for past 25 years. In fact, owing to anti-national and anti-Hindu rulers, Hindus in India are also facing exile since independence in 1947. Now Hindus have to wake themselves up and create awareness amongst all Hindus for their unification which is the need of the hour. Our goal is ‘Krunvanto Vishwam Aryam’.”
Dr. Agnishekhar, Dr. Ajay Chrongu, Shri. Susheel Pandit and Shri. Vijay Raina were the other dignitaries attending the program. The program was started with lighting of lamp; followed with Dr. Sudhir Mahajan narrating 25 years of hardships faced by Kashmiri Hindus, through a poem. Through other music and plays presented on the occasion, people were made aware of work undertaken for revival of Kashmiri refugees by ‘Panun Kashmir’.
Highlights

HJS was invited to put up exhibition at the venue of the program on ‘Oppression of Kashmiri Hindus’ depicted on flex boards.
The organizers also granted permission to Sanatan Sanstha for putting up exhibition of holy books published by it and its ‘sattvik’ products.
The program was attended by film actor Shri. Anupam Kher, who is a Kashmiri Hindu. He said that all organizations working for Kashmiri Hindus should come together and work jointly.
Shri. Vinay Panwalkar, State Coordinator of HJS briefly explained to Shri. Anupam Kher about various activities undertaken by HJS and presented to him a book titled ‘Hindu Rashtra ki Sthapana Kyon Avashyak Hai (Why is there need for establishing Hindu Rashtra)?’
Source : Dainik Sanatan Prabhat