Will those refusing to acknowledge power of ‘Yadnyas’, show prudence to accept proofs based on scientific research ?

Pune (Maharashtra) : It has been scientifically proved that ‘Agnihotra’ helps in reducing not only air pollution but also water pollution. Effect of ash collected from ‘Agnihotra’ was mixed with polluted water of Rivers Mula – Mutha and it was observed that the saline in water was reduced to 80%. This ash has anti-microbial characteristic which shows that ‘Agnihotra’ is useful in purification of water. (Will the State and Central Governments make use of the findings of this experiment for purification of Indian rivers ? – Editor, Dainik Sanatan Prabhat) ‘International Journal of Agriculture Science and Research (IJASR)’ has taken note of this experiment. The research was conducted by Pranay Abhang and Manasi Patil under the guidance of Dr. Pramod Moghe, a retired scientist from National Chemical Laboratory (NCL). ‘Agnihotra’ was performed at Bio-Technology Department of Fergusson College and ‘Ramanbaug’ School. 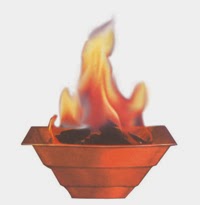 Shri. Pranay Abhang said, “Fresh ash was collected from ‘Agnihotra’ in a column through which 500 ml of polluted river water was passed. The water was then tested and it was found that 80% of the salinity was reduced. ‘Agnihotra’s experiments have given good result even in case of growth of crops and germination of seeds. Two saplings of equal height and with same number of leaves were kept in two different rooms where they would get sunlight and water in equal quantity. In one of those rooms, ‘Agnihotra’ was performed. It was observed that the growth of sapling in that room was better. A comparative study of effect of ‘Agnihotra’ performed by chanting ‘mantras’ and without ‘mantras’ was also seen which showed that ‘Agnihotra’ performed with chanting of ‘mantras’ gave better results in sapling’s growth. The content of pollutants like Sulphur Dioxide and Nitrogen Dioxide reduced by 90% due to ‘Agnihotra’ and the bacteria and germs also reduced in the atmosphere.”

Shri. Abhang expressed his interest to carry out research on ‘Agnihotra’ in future and his concern over paucity of funds for conducting research on concepts from Vedic science. (Will BJP Government bring good days by encouraging research based on Vedic science ? – Editor, Dainik Sanatan Prabhat)