Memorandum submitted in Mumbai; protests against the denigration in various cities including Bengaluru, Karwar, Vijapur 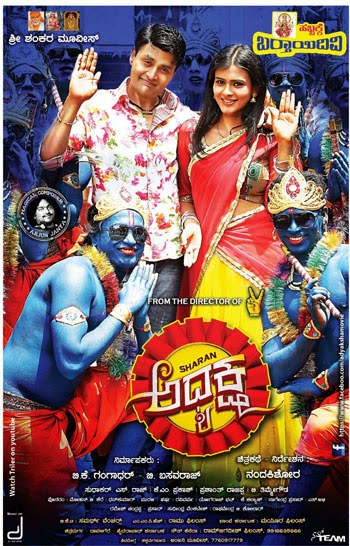 Mumbai : Hindu Janajagruti Samiti (HJS) has demanded to ban Shankar Movies Production’s film ‘Adhyaksha’, denigrating Bhagwan Shreekrushna and to cancel the Certificate given to the said film by submitting a memorandum.

In this film the hero and the heroin are shown dancing in the attire of Shreekrushna, so also a poster displaying the hero and the heroin blessing people. This has hurt the sentiments of all the Hindus. As a result the Rashtriya Hindu Andolan in Karnataka state has opposed this film vehemently. It is also stated in the memorandum that if the Board does not take any step regarding this issue then the agitation by the HJS will be made more severe and the Central Film Censor Board will be responsible for the situation.

Other demands made by the HJS to the said Board

1. The Central Film Censor Board only should stop in future the production of films hurting Hindu religious sentiments by denigrating Hindus’ Deities, Saints and Culture.

2. The Board should have a member from the religious field.

Bengaluru (Karnataka) : A Delegation of HJS submitted a memorandum, to Mr. Nagendra Prasad, the Section Head of the Censor Board here opposing the denigration of Bhagwan Shreekrushna in the film ‘Adjhyaksha’. Mr. Prasad said that the memorandum was being sent to the Film Chamber of Commerce so also, a letter will be sent to the Committee in charge of viewing films.

Karwar (Karnataka) : Rashtriy Hindu Andolan on behalf of HJS along with all the Hindutvawadi organisations was staged at Karwar making demands that the Government should not grant permission to screen the film ‘Adhyaksha’ and it should cancel the reservation given to Muslims under the name of religion in Telangana state. Thereafter the memorandum making the demands was handed over to the Upayukta of North Canada. Devout Hindus like Mr. B.G. Mohan, Dist. Secretary of Vishwa Hindu Parishad, Mr. Manoj Bhat of BJP, Mr. Vishweshwar Kali of HJS, Capt. Manohar Naik, Mr. Ratan Durgekar, Mr. Somnath Salgaokar, Mr. Rajan Kolamkar, Mr. Sagar Kurdekar etc. and seekers of Sanatan Sanstha were present on this occasion.

Positive response by owners of theatres in Vijapur (Karnataka)

Won’t screen the film unless the deletion of the denigrating parts of the film is done !

Vijapur (Karnataka): Spontaneous response received from theatre owners here to the call given by HJS and other Hindutvawadi organisations opposing the film ‘Adhyaksha’. In their response the theatre owners said that unless the events denigrating Bhagwan Shreekrushna are deleted from the film ‘Adhyaksha’, we will not screen the film. Theatres involved in this are Jayashree, Amir, Tripura Sundari, Laxmi, Alankar, Dreamland and Apsara. The theatre owners thanked the delegation from bringing to their notice the denigration of Bhagwan Shreeekrushna made in the film and also expressed that it was wrong on the part of the Censor Board to permit such a film. (All should take a lesson from Vijapur’s theatre owners. – Editor Sanatan Prabhat)