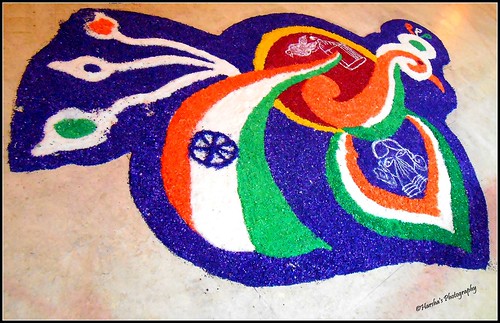 Nipani-Belgavi (Karnataka) : It was observed that ‘rangolis’ depicting national flags were drawn at Nipani and surrounding places, leading to their abuse. Nobody used to realize abuse of national flag taking place through this medium. Hindu Janajagruti Samiti (HJS) submitted representations to 11 elected representatives on the subject under its drive to preserve honour of national flags.

Shri. Dhanaji Nirmale, municipal councilor explained all points mentioned in the representation, in a joint meeting held with administrative officers of Town Council, education officer, teachers, police and Tehsildars; along with the issue related to insult of national flags through ‘rangoli’. Shri. Balasaheb Desai, Dy. Mayor also demanded action on points raised through representation; thus the topic reached to all and such ‘rangoli’ was not drawn at many places, and at some places, it was removed after the topic was explained to the concerned. (Congratulations to municipal councilor Shri. Dhanaji Nirmale and Dy. Mayor Shri. Balasaheb Desai for active participation in prevention of abuse of national flags ! Elected representatives from other places can also take initiative in this matter ! – Editor, Dainik Sanatan Prabhat)

1. On submission of representation to Dy. Mayor Shri. Balasaheb Desai, he immediately instructed staff from his departments not to draw such ‘rangolis’.

2. Many teachers informed that they had received instructions from Municipality in this regard. Teachers explained the subject to students; therefore, such ‘rangolis’ were not drawn at some places.

3. Shri. Dhanaji Nirmale told about abuse of national flags through ‘rangoli’ to staff from his department. When he was passing through Vidyanagar, he saw a person drawing ‘rangoli’ of national flag. He called persons from that house and explained the subject to them; after which, the ‘rangoli’ was removed. (There is need for active elected representatives like Shri. Dhanaji Nirmale everywhere ! – Editor, Dainik Sanatan Prabhat)

4. ‘Rangoli’ of tri-colour was drawn outside door of a house at Dalal Peth, Nipani. Shri. Sandip Jadhav and Shri. Sunil Wadkar explained the issue to person drawing such ‘rangoli’; but first, he was not ready to accept. Later, he said that he would not draw such ‘rangoli’ in future.