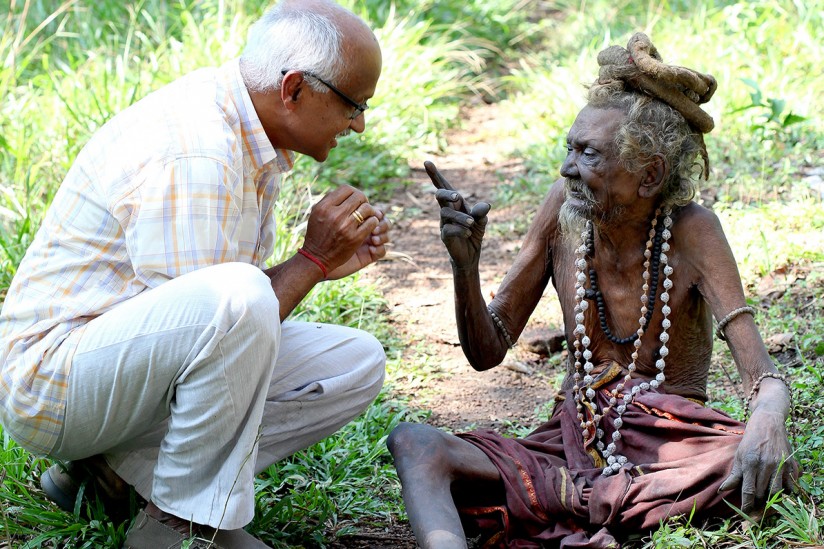 In the lush, verdant hills of India, Bhagavan Kani rises from his bed.

He spends a few serene moments gazing at the early morning sun as it crests the horizon, sipping water infused with a local spice leaf called tulsi.

Kani eats a simple breakfast of raw vegetables and fruits. Barefoot, he sweeps the leaves from a dirt path in his garden and climbs steep stone steps to take a stroll through the hilly village. Later that day, he sits outside his coconut-leaf-thatched hut, recites tribal songs and talks to plants and animals.

My dream is to bring these traditional healers to our campus to sit down and listen to them.

It’s a quiet existence that normally wouldn’t garner much attention. But Murali Nair, a clinical professor at the USC School of Social Work, is fascinated for one simple reason — the man is more than 100 years old.

“People are definitely living longer,” Nair said. “I’m not saying that medical advances have nothing to do with it, but there are other reasons. There must be something beyond their genes, maybe something we can document.”

Through interviews and visits with dozens of centenarians around the world, Nair is exploring lifestyle factors that may influence health and promote longevity. He has identified 11 attributes shared by all his study subjects, regardless of their socioeconomic background. Nair is hopeful that his findings will bring legitimacy to practices that are often overlooked and sometimes scorned by the health care establishment, such as spiritual rituals, a positive outlook on life and various traditional healing practices.

“We can learn from them instead of judging before really understanding,” he said. “That is why my dream is to bring these traditional healers to our campus to sit down and listen to them.”

A history of healing

Nair’s ethnic origin is Kerala, a state on the southwest coast of India known as “God’s own country.” As a child, he experienced many of the traditions and holistic health practices that are now a focus of his field studies and research.

When he visits India to speak to scholars studying healing approaches such as Ayurveda and naturopathy, Nair said his descriptions of the scientific approach to health in the United States are often met with amusement.

“Clinical studies are slowly starting to show that some spices like turmeric and cinnamon are good for your health,” he said. “They laugh. They say, we’ve known for thousands of years that this works. It’s a tradition passed along from generation to generation.

Along with several colleagues, Nair co-wrote a book called Healing Across Cultures and produced a mini-documentary titled Healing Visions of India. He became interested in possible connections between lifestyle and longevity when conducting field studies as a senior Fulbright scholar in Sri Lanka.

Even though he had the funds to afford a nice house and a chauffeur while studying there, he asked instead to be placed with a family in a remote village. In Sri Lanka, Nair began exploring the correlations among social, cultural, spiritual, dietary, physical, and mental habits and the promotion of health and well-being among elders.

“The scientific community is slow to accept these practices,” he said. “But if there is a person who lived to 100 and did not use modern medicine very often, there is value in sitting and listening to them.”

Nair has traveled to Bali, Canada, Hawaii, Hong Kong, India, Macau and Peru to seek out centenarians, and he is planning a trip to Japan. He has found that many of the people he interviews share common characteristics.

“They have a general air of optimism and positivity and try to instill that attitude in others around them,” Nair said. “They engage in physical and mental activity on a daily basis, often cleaning, walking, gardening, cooking, reading, writing and memorizing passages of poetry, stories and life events. Learning never ends for them. They always hang around with people much younger than them. Even with a child, they find something to talk about.”

Many of the centenarians he has met practice careful eating habits; most are vegetarians who consume fresh vegetables and fruits, spices and herbs in small but regular quantities. Physical and mental activities and practices such as bathing in cold water and watching the sunrise in the early morning are common.

Nair described one centenarian he met in India, a millionaire who had 35 servants but would still wake up early every morning to sweep leaves, walk into the village instead of taking a car and stick to a strict eating schedule even if his guests are late.

“Some people say, oh, I’m rich, I have servants, I can sit here and watch television,” Nair said. “He still takes an axe and chops firewood; he’s out there cleaning and reading and writing.”

Nair has embraced much of this lifestyle himself. He practices early morning sun gazing, yoga and mindful meditation, and he has a positive perspective on life in general. Very careful about what enters his body, Nair maintains a vegan diet, grows his own sprouts and drinks plenty of fresh water.

He shares his insights about longevity during seminars and presentations throughout the world, has produced four mini-documentaries and is working with a physician and scientist on a manuscript about the secrets of long life focused on evidence-based traditional healing.

“My end goal is that we can say, yes, there is something to our traditional values, and we can translate this into evidence-based practices,” he said. “We need a dialogue with these traditional healers and create a welcoming atmosphere to understand and learn from them.”