Religious sentiments of Hindus have been hurt due to attack on Amaranth pilgrimage ! – Bunty Baba

Mammoth protest march taken out at Ludhiana by pro-Hindu organizations

Ludhiana –  Few organizations render ‘bhandara’ service at Baltal even in adverse conditions and serve devotees; but separatist factions have hurt faith of Shiva-devotees and it is condemnable. Amarnath pilgrimage is a symbol of Hindus’ faith. Incident which took place at Baltal has hurt religious sentiments of Hindus, stated Shri. Bunty Baba, Chief of Agrawal Peerkhana Trust. On 22nd July, pro-Hindu organizations took out mammoth march to protest against fanatics’ attack on Amarnath pilgrimage when he expressed the above views. (In a country where Hindus are in majority, only one protest march is taken out when injustice is done to Hindus ? Look at fanatics who took out protest marches in India against attack on Palestine; whereas Hindus keep quiet despite attack on Hindu pilgrims in India ! When is the feeling of brotherhood going to be generated amongst Hindus ? – Editor, Dainik Sanatan Prabhat)

Devout members of Trust joined the march carrying saffron flags; so it was saffron atmosphere everywhere. The march taken out at 11.00 a.m. was concluded at ‘Ghantaghar Chowk’. Shri. Yogesh Bansal and Shri. Bobby Behl have demanded that the Central Government should give strict instructions to the Government of Jammu-Kashmir for providing security to devotees. (Will BJP Government of intense ‘Hindutvavadi’ Narendra Modi pay attention to it or is going to keep quiet following footsteps of Congress ? Establishment of Hindu Rashtra is the only solution to bring about change in this situation. – Editor, Dainik Sanatan Prabhat) Shri. Narinder Gupta, Manoj Sharma, Sonu Mahajan, Deepak Manchanda, Pawan Sahni, Ashok kumar, Amit Verma etc. were present on the occasion.

What steps is BJP Government going to take for security of Hindus’ pilgrimages ? 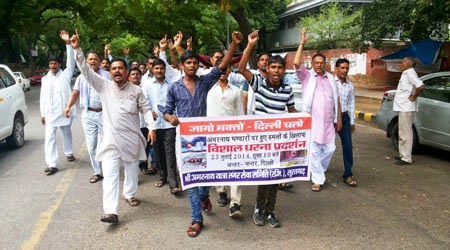 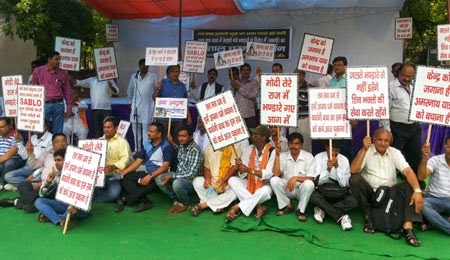 Rashtreeya Hindu Andolan was staged for the following demands.

New Delhi, 22th July – Members of Bajarang Dal, Vishwa Hindu Parishad (VHP) and Shiv Sena in Delhi have made a demand with the Central Government for dissolution of Jammu & Kashmir Government of Chief Minister, Omar Abdulla and Governor N. N. Bohra. Pro-Hindu organizations staged demonstrations at Jantar-Mantar on 19th July to protest against Muslims’ attack on Amarnath pilgrims at Balatal. The demonstrators burnt effigy of J-K Chief Minister Omar Abdulla. Shri. Omdatta Sharma, Delhi Regional Chief of Shiv Sena; its Dy. Chief, Mangatram Munde, VHP’s Central Minister, Koteshwar Sharma and its regional Minister Karuna Prakash were present on the occasion. Attack on Amarnath pilgrims is very shameful. The Government needs to take stringent action so that nobody would dare to do such things in future. The Government should cancel article 370 because only then, Hindus will be able to stay in J-K State.

Demonstrations staged even at Bhagyanagar (Hyderabad) !

Demonstrations were staged on behalf of different pro-Hindu organizations on 19th July for their demands like re-construction of Shivaji Gopuram at Sri Shailam; preservation of ancient structures and temples of Hindus and action against fanatics who attacked Amarnath pilgrims. A representation of the above demands was handed over to the District Collector. Activists of Hindu Janajagruti Samiti, Netaji Sphoorti Kendram, Sriram Yuva Sena, Yoga Vedanta Samiti and many such organizations were present on the occasion.

Agitations in Punjab against fanatics’ attack on Amarnath pilgrimage !

Punjab, 22th July – On 17th July, at Balatal, fanatics attacked Amarnath pilgrimage. During this attack, fanatics burnt tents of Hindus offering ‘langar’. The incidents ofarson has resulted in loss of property worth a crore of rupees. Activists of pro-Hindu organizations like Shiv Sena, Bajarang Dal, all-India Hindu Suraksha Samiti, Parashuram Sena and Shiv Sena-Punjab staged agitations at Phugwara. (Indifferent Hindus from other parts of the country should learn from such active Hindus ! – Editor, Dainik Sanatan Prabhat)

1. Hindus were staging agitation in peaceful manner when Imam maulana Ubes Ur Rehman along with other Muslims raised objection to Hindu demonstrators.

3. Maulavi said that stone-pelting at mosque during Ramzan would not be tolerated and they would stage demonstrations on 21st July against such agitation.

4. Maulavi Ubes Ur Rehman was promised by Phugwara Superintendent of Police Gurubacahn Singh that no untoward incident would be allowed to take place against any Muslim. (Have police ever given such promise to Hindus during riots ? In fact, two policemen had also joined in attack at Balatal. Hindus should realize the need for establishment of Hindu Rashtra ! – Editor, Dainik Sanatan Prabhat)

5. Pro-Hindu organizations have opposed such agitation by Muslims.

What are the demands of Rashtreeya Hindu Andolan (RHA) ?

1. Maharashtra Government led by Congress-front has offered 5 % reservation for Muslims keeping forthcoming elections in mind. Such reservation should be cancelled !

2. Indians should inflict financial boycott on Chinese products to teach a lesson to China for publishing distorted map by showing some integral parts of India like Arunachal Pradesh and Kashmir as that of China.

3. Action should be taken against those who have conspired to defame Hindu Saints with the intention of creating rift between Hindus and Hindu Saints.

5. To condemn all those who are supporting ISI, a terrorist organization.

Has India imported even foreign policy of China ? – Parag Gokhale

Pune – Prime Minister Narendra Modi recently attended ‘BRICS’ conference. Chinese soldiers infiltrated in Indian border 3 times while Modi was having discussions with President of China. The Central Home Minister, Rajnath Singh, however, gave an explanation that such incidents occurred as there was no proper demarcation of border between these two countries. His justification makes one think whether he is Home Minister of India or China ? Shri. Parag Gokhale of Hindu Janajagruti Samiti (HJS) raised a query whether India has imported even foreign policy of China along with its products; while addressing demonstrators at Goodluck Chowk, Deccan Gymkhana participating in RHA. More than 125 devout Hindus took part in the demonstrations. Different slogans condemning Central Government for not providing adequate security for Amarnath pilgrimage; condemning Maharashtra Government for harassing Hindus etc. were raised during demonstrations. Shri. Vijay Gawade, Joint Coordinator of ‘Patita-Pavan Sanghatana’ extended full support to HJS activities.

if Hindus’ interests are not considered ! – Dilip Bhivate

Kolhapur – Chhatrapati Shivaji Maharaj has taught us how to destroy evil doers and protect self; but we do not follow his teachings. We should have control over the Government and take it to task. If interests of Hindus are not given attention, there will be change of power even in Maharashtra as it happened at Centre. The above warning was given by Shri. Dilip Bhivate, Vice President of ‘Hindu Ekata Andolan’ during demonstrations held at Shivaji Chowk on 20th July. Shri. Mansingh Shinde and Shri. Babasaheb Bhopale of HJS also expressed their views.

Have police ever taken such action during demonstrations held by fanatics ?

Jalgaon – On 19th July, demonstrations were held at Shivateertha Chowk under RHA. Police took photographs of the demonstrations on their cell phone. After demonstrations, a representation was submitted by pro-Hindu activists to Dy. District Collector, Shri. Dhananjay Nikam in the presence of other dignitaries like Shri. Mohan Tiwari, Dy. city-Chief of Shiv Sena, Shri. Kapil Thakur and Shri. Mahesh Sapkale of Swarajya Sena, Shri. Niranjan Chodankar, Shri. Shreyas Pisolkar of HJS and Shri. Dattatreya Waghulade and Sou. Nanda Nagane of Sanatan Sanstha.

1. Participation of devout Hindus was remarkable despite heavy rains.

2. Large number of school students took part in the agitation.

1. More than 150 patriotic citizens put their signature on the representation.

2. Many Muslims were watching the agitation standing close to the venue. One of them was purposely standing on a vehicle in front of demonstration. (Will Hindus dare to behave in such manner during demonstrations by fanatics ? – Editor, Dainik Sanatan Prabhat)

3. Police did not give written permission but advised verbally that there would be no problem in staging demonstrations. Written permission was not given till the last moment although an activist of HJS was pursuing the matter for 2-1/2 hours. (Have police ever made fanatics wait for permission in such manner ? If such police, who oppose to lawful agitations staged by only Hindus, get killed at the hands of fanatics, will Hindus feel bad about it ? – Editor, Dainik Sanatan Prabhat)

4. Two policemen were deployed to keep watch on the situation.

6. Demonstrations were telecast by ‘Dharashiv In’ channel.