Hindus need to realize that Modi Government would not

protect them and they should become active for establishment of Hindu Rashtra !

Amritsar – Agitation is staged all over the country to condemn attack by fanatics on Amaranth pilgrimage. Few devotees, who have returned from the pilgrimage, narrated actual facts in this connection to Shri. Anil Joshi, a cabinet Minister. The pilgrims accused that attack on Amarnath pilgrimage was a conspiracy of local fanatics and Jammu-Kashmir police. They gave following information.

1. Jammu-Kashmir police sent Indian army men to a very high point in early morning for security, on the day of attack and later, at about 8.00 a.m., with the help of local fanatics, they attacked Hindus’ camps and ‘langar (food-court where food is offered for free)’. (Indian army men blindly believe what cunning Jihadis say ! – Editor, Dainik Sanatan Prabhat)

4. There is a temple in every place, where food is arranged for Hindu devotees. Stones were pelted even at the idols in such temple.

5. Fanatics stood on the banner which had picture of Bhagavan Shiva and danced on it. They denigrated Shiva-linga by throwing shoes at it. They hang women’s clothes outside temples.

6. When we came out on the road to take things for ‘langar’, we saw police of Jammu-Kashmir setting tents on fire. Instead of stopping fanatics, they attacked us with sticks and injured many devotees seriously.

7. Police were encouraging fanatics by telling them to loot pilgrims as much as they wanted. They looted everything that they could take with them on horse-backs and threw water on remaining things of ‘langar’ which spoilt the grains. (Will those, who demand giving reservation to muslims in police department and Indian army to improve their financial position, say something about the oppression by fanatics in ‘Khaki’ ? – Editor, Dainik Sanatan Prabhat)

8. They urinated in ‘Homa-kunda’ and in utensils kept for cooking food; so also threw shoes at them.

9. They were shouting that ‘Kashmir Hamara Hai (It is our Kashmir ); why have you come here ?’ and raising slogans hailing Pakistan.

Amritsar, 24 July – On the call of Bandh by Punjab Shiv Sena, Vishwa Hindu Parishad (VHP), Punjab Gau Raksha Dal and other Hindu organisations a Complete Bandh was observed in holy city of Amritsar and outskirts today on Monday.

Today, VHP and other religious organisation activists along with local public of Hindu community held protest demonstrations in the major street of city here besides burning effigies meant for fanatic elements attacked Sri Amarnath Yatra Hindu Pilgrims at Baltal base of Kashmir valley on Friday evening .

No shop, business establishments were allowed functioning by the mob of various Hindu activists roaming in the open jeeps and two wheelers while brandishing naked swords that created Hindu-Sikh valour in the city. Nevertheless to say the cavalcade of Hindu outfits were moving amidst the tight security of police. Members of Punjab Gau Raksha Dal played a major role for the success of this Bandh, as report came in from authentic source.

During the bandh, activists held demonstrations in major areas of the holy city. Most of the shops, business establishments and educational institutions in the city remained closed.

According to the police, no untoward incident was reported from anywhere.  According to source, Punjab Police prevented protesters from going inside historical Khairudeen mosque at hall bazar. Hindu demonstrators were shouting slogans against J&K and Pakistan governments.

In the context of growing Islamic hooliganism upon Hindu Pilgrimage of Amarnath Yatra, Dr. Pravin Bhai Togadia, International President of VHP, warned a dire consequences for the attacking Fanaticsin the line of Godhra or Muzaffarnagar.

Call for ‘Jammu Bandh’ to protest against fanatics’ attack on Amarnath pilgrimage ! 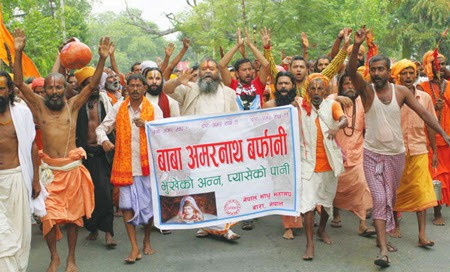 A series of queries arise :

Jammu, 19th July – Vishwa Hindu Parishad and Bajarang Dal gave a call for ‘Bandh’ in Jammu on 19th July to protest against attack on Amarnath pilgrims by fanatics at Baltal. This incident has created strong reaction amongst Hindus and all ‘Sadhu’ community has come on the road. During demonstrations held at one place in Jammu, effigy of J&K’s Chief Minister, Omar Abdulla was burnt.

It is learnt that on 18th July, fanatics attacked pilgrims going to Amarnath; in which 60 pilgrims have been injured and condition of 7 of them is serious. CM Omar Abdulla has appointed a senior officer to conduct inquiry into the matter. Central Home Minister Rajnath Singh contacted Omar Abdulla and instructed him to take necessary steps for security of pilgrims. Jammu-Kashmir police have, however, tried to show that the big attack on pilgrims was just a trivial fight. It has been stated in their report that, few tents got burnt injuring few persons. The report does not make any reference to fanatics gathered there. The above news has been published on the website of ‘Hindu Existence’.

Damage caused to pilgrims in the attack

4. 150 gas cylinders ignited culminating into explosion of most of them.

5. About 60 pilgrims including 21 security guards injured; out of them condition of 7 is serious.

7. Pilgrimage withheld for one day.

1. Governor N N Bohra of J & K has expressed displeasure over the incident and made an appeal to maintain peace and harmony.

Authorities on Friday suspended the Amarnath pilgrimage from Baltal following clashes between langar operators and other service providers which left at least 20 people injured and more than 300 tents and langars (community kitchens) destroyed in a fire.

According to sources, a local tent owner, Nayib Ahmad, was rushed to Sher-e-Kashmir Institute of Medical Sciences [SKIMS] with multiple injuries. His attendants complained to the officials alleging that a langar operator from outside the Valley stabbed Mr. Ahmad and attempted to kill him.

Within minutes, hundreds of local tent owners and their workers gathered at Baltal and attacked the langar operators. According to officials of Shri Amarnath Shrine Board, that manages the seven-week-long pilgrimage, there were around 30 langars operated by non-Kashmiri charitable organisations and about 600 tents set up by the locals for accommodation of the pilgrims at the base camp of Baltal, 100 km from Srinagar.

The clashes left at least 20 people injured and could be contained only after huge security reinforcement reached the place as the intervention by local police and Central Reserve Police Force personnel proved ineffective. Police and CRPF tried firing in air, tear gas and baton charge to disperse the crowds. Seventeen of the 30 langars were destroyed as the fire spread from a vandalised langar spread. The explosion of LPG cylinders used at the langars could be heard for hours.

Residents alleged that the CRPF men resorted to indiscriminate beating of the tent owners and their workers before they set on fire a large number of their tents. The fire spread to the whole camp. Officials said that the number of the tents reduced to ashes was around 300.

However, Inspector-General of Police Abdul Gani Mir, who arrived by a helicopter along with Divisional Commissioner Sahilandar Kumar, told The Hindu that the number of the tents destroyed in the fire could be “between 50 and 60”. He said that initially there was a minor clash between a langar operator and a tent owner which snowballed into a major clash. “A couple of langars were destroyed due to LPG blasts,” Mr. Mir said. Back at the district headquarters of Ganderbal, the IGP said that the situation was “tense but under control”. He said that fire was controlled in the afternoon.

Jammu and Kashmir Chief Minister Omar Abdullah on Friday briefed Union Home Minister Rajnath Singh on the clash that has led to suspension of the pilgrimage from Sonmarg side.

Sources told The Hindu that Mr. Singh urged Mr. Abdullah in a telephonic conversation to take all necessary measures for restoration of calm and resumption of the pilgrimage. He also asked him to ensure that the tension does not spread to other parts of the valley, particularly the highway used by over 6 lakh pilgrims to reach the base camps of Baltal and Pahalgam. With the daily intake of over 15,000, more than 2 lakh pilgrims have so far visited the cave sharine and performed Darshan.

The Chief Minister, according to sources, assured Mr. Singh that the State government would leave no stone unturned to ensure the safety of the pilgrims and the official and non-official people associated with the Yatra. He told Mr. Singh that a team of senior officials, which included Mr. Kumar, the Kashmir Divisional Commissioner and Mr. Mir, the IGP, visited Baltal and brought the situation under control.

Efforts were underway to put in place necessary logistics to ensure that no pilgrim suffered on account of food or shelter at the base camp of Baltal, Mr. Abdullah told Mr. Singh.