For someone who has been residing in the satellite city for 32 years, the changes that have taken place over the years would be too stark. Same goes for Asit Ghosh who came to reside in the city in 1981 and has witnessed the city shed its barrenness and evolve into a planned and self-sufficient township. 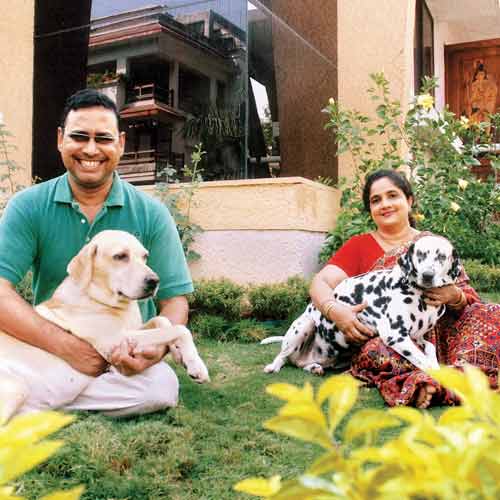 Asit Ghosh with his wife and two dogs

“When I came here, I was working in the BARC as a scientist. I had no option but to live here as Mumbai was expensive even then when it came to accommodation. Through these years I have seen the city develop immensely and one of the aspects I like best is that the city is segregated into small, well-planned and self-sufficient nodes,” said Ghosh, adding that unlike other places, one need not go far away in search of daily necessities as well as luxuries.

Ghosh asserts that he would not opt to live in Mumbai come what may because there are fundamental differences between the two cities that make people choose Navi Mumbai. “I live in a house that is not surrounded by a series of buildings with matchbox-sized flats. We have open spaces here and these are important to not feel closed in and crowded which is common not only in Mumbai roads but also in the apartments,” he said.

However, he concedes to the fact that the city is still young and thus there are aspects in which it lags behind, that can be improved.

Since transport is an important facility required for the proper functioning of a city, Ghosh feels monorail services should be introduced connecting Vashi station to the rest in order to facilitate fast and affordable travel between nodes. He also feels that the city needs to be better equipped with options for recreation and entertainment.

“Having an area identified for entertainment purpose is a good option so that there can be quite a few cinema halls built within that area. Vishnudas Bhave is the only auditorium here for plays and concerts and if people are not satisfied with its programmes, they do not have an option of going elsewhere,” he added.

Having been at the helm of a premier Bengali organisation for four years, Ghosh also feels that the cultural scene of the city can be upgraded. He has been heading the Bengali Trust for four years now and is known to organise extravagant Durga Puja celebrations that is known to attract one and all. Speaking about the responsibility he said, “It is hectic and demanding but the results are very satisfying and that keeps me going with the same energy. Our goal was to establish a home for cancer patients and destitute people and we are working towards achieving it at the earliest.”

Expressing his opinion about cultural organisations in the city, Ghosh says that organisations do not have a calendar with proper schedule for events to be taking place annually. Cultural events are not pre-planned and this should change so that people can have a stable dose of cultural programmes to add colour to their monotonous lives.

He also feels that giving financial subsidies to such organisations and having able personnel to run them is pivotal. The municipal corporation should also run a check in order to determine which organisations genuinely promotes culture, he adds.

“These are some of the changes that will sure elevate the status of Navi Mumbai and change lives of its residents for the better so that it continues to be a favourite place of residence for all,” he signed off.