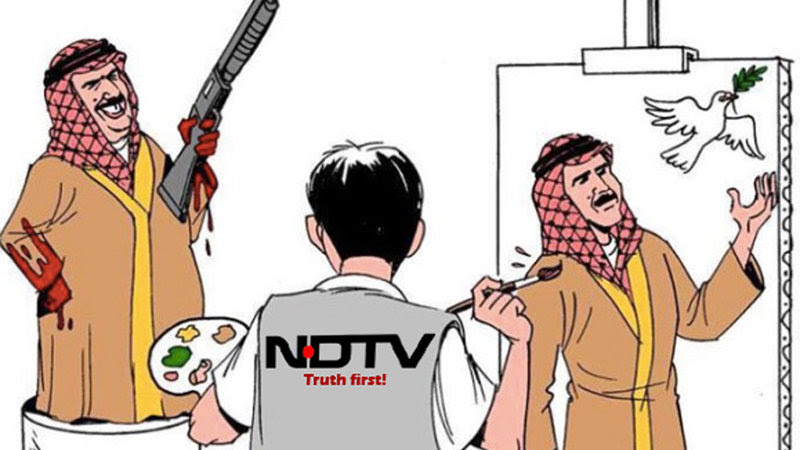 NDTV has always been a controversial Indian news channel. And at various incidents anti-national and hate spreading elements have been spread by NDTV and their journalists. Also anti BJP and the Prime Minister

It is really important for media to raise the truth, question decisions fairly, and do an unbiased journalism. opinion must be stated as opinion not UN-named sources

NDTV, New Delhi Television Limited is an Indian commercial broadcasting television network founded in 1988. Media holds one of the biggest power in a democracy, to inform the republic about affairs and news. But news networks like NDTV are using this power to manipulate news or indirectly the thoughts of individuals.

NDTVs social media handles are also responsible for preaching hatred against certain religion. Whilst the government is trying to improve the image of India overseas, these type of false media agencies would crash

up every effort made by the government or the people.

If these type of media agencies and certain controversial statements by certain other medias are not stopped today, than tomorrow they it may result in ignition of riots, conflicts and ‘intolerance’ in the nation, and it would be too late to stop them at that point.

On a sight on NDTVs history, various cases and controversies against NDTV can be found.

What do we want?

I believe after the people of a nation, media holds the biggest responsible power in a democracy. But they remain unaccountable and answerable to a proper regulatory authority. The present Broadcasting Authority governing principles need to strengthened and add a Press complaints commission to deal with views and public complaints daily.

The press could be using their freedom wrongly without being accountability and answerable.

I don’t have any personal issues with NDTV or any of it’s subsidiaries, but if the media goes wrong way than it could lead to catastrophic disasters.

NDTV has a worldwide presence and I know it is difficult (even for the government) to go against these kind of gigantic corporate and that is why we need the people, the nationalists of India to support me and put an end to these kind of hate spreading cooperatives.

UNITE INDIA, DON’T WAIT OR IT WILL BE TOO LATE!

NDTV India ban: Not the first time a channel has been taken off air

The government ordering Hindi news channel NDTV India off the air for a day might have outraged many but the action is not without precedent. Television channels were blacked out 28 times over the past decade for violating broadcasting norms.

Most of these cases pertain to airing adult content on television and channels such as AXN and Fashion TV have been at the receiving end of government action.

“Punitive action was taken against violators even during the UPA rule,” said a ministry official, underlining that the decision to bar channels was not peculiar to the current BJP-led government.

Between 2005 and 2013, when the Congress-led United Progressive Alliance was in power, as many as 20 channels were taken off air, mostly for flouting rules against showing adult content and nudity.

The action against NDTV is, however, the first time a channel was barred from broadcasting for breaching laws pertaining to national security. The order has drawn widespread condemnation, especially from fellow journalists and activists, who accuse the government of muzzling free speech.

The decision was taken following a recommendation by an inter-ministerial committee of the information and broadcasting ministry after it concluded NDTV India revealed “strategically-sensitive” details of the Pathankot airbase during a militant attack earlier this year.

In 2015, news channel Al Jazeera was barred from airing for five days for showing the wrong map of India.

Showcasing global trends in fashion, FTV has been taken off air three times between 2007 and 2010. The first time it was banned for two months after the channel aired a programme titled ‘Midnight hot’; showing visuals of topless women earned it a nine day ban in 2010 which was followed by a 10-day ban in 2013 for explicit visuals.

Sources in the I&B ministry said the punitive action against the TV channels was in line with the rules laid down in the Cable Television Networks Rules, 1994, which bar showing nudity and adult content.

Programmes that denigrate women through the “depiction in any manner of the figure of a woman, her form or body or any part thereof in such a way as to have the effect of being indecent, or derogatory to women, or is likely to deprave, corrupt or injure the public morality or morals,” are barred by the act. Consequently channels such as AXN, Cine world and FTV were taken off air for showing adult content.