Karad (Maharashtra) – Most of the Sri Ganesha idols were immersed in water due to awareness created by pro-Hindu organizations, Ganesha Festival Mandals, Sanatan Sanstha and Hindu Janajagruti Samiti (HJS) on the day of ‘Anant Chaturdashi’. 60% of Mandals avoided throwing ‘gulal’. The drive undertaken by HJS and Sanatan Sanstha was commendable; therefore, ‘Gajanan Natya Mandal’ and ‘Ganesha Mandal’, Teli Galli, Shaniwar Peth felicitated representatives of HJS and Sanatan Sanstha by giving coconut to them at ‘Krushna Ghat’; besides slogans were raised near marquee of a club; against those who were speaking against Hindu Dharma.

1. Shri. Dasharath Dhotre, President of ‘All-India Vadar Samaj Ganesha Mandal’ appealed to people to immerse idols in flowing water; in support of drive undertaken by Sanatan Sanstha and HJS. He also promised to bring idol made of clay and small in size for next year’s festival.

2. Members of ‘Siddhivinayak Ganesha Trust Mandal’ from Devakar Colony, Agashivanagar  said that they could not get idol made of clay this year; but have already ordered for clay idol for next year.

3. The idol of ‘Kranti Auto Rickshaw S. T. stand’ was of clay and their procession was also taken out in ideal manner. 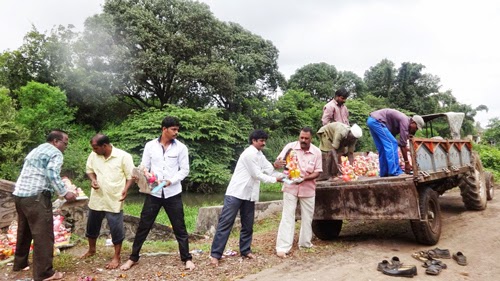 Kolhapur (Maharashtra) – Some environmentalists, Rotary Club and few other organizations undertook idol-donation drive in the city and Unchgaon during Ganesha festival. On 9th September, however, pro-Hindu activists from Unchgaon found that donated idols were kept on a side of road by environmentalists. ‘Hindutva-waadis’ were enraged due to this and employees of Unchagaon Gram Panchayat immersed all such idols in Panchganga River at 11.00 a.m. (Environmentalists who collected idols under idol-donation drive and denigrated them by abandoning in this manner, are anti-Hindus ! All Hindus need to unite and take them to task; else there will be rise in such incidents  ! – Editor, Dainik Sanatan Prabhat)

1. On the day of immersion, members of Hindu Yuva Pratishthan, Vidnyan Prabodhini, Save Citizens etc. were waiting at Rankala Rajghat for devotees and appealing to them to donate idols for protection of Rankala Lake.

2. Near Kotiteertha Lake at Unchgaon, students of New Polytechnique were appealing devotees for donation of idols. They had collected 400 idols; but instead of immersing them in river, the idols were kept on side of the road, is the doubt expressed by local residents.

3. The idols were lying on side of the road for past 5 days; therefore, ‘Hindutva-waadis’ collected them and immersed them in Panchganga River.

Phalatan (Dist. Satara, Maharashtra) – A representation was submitted to the Chief Officer of Phalatan Town Council by Hindu Janajagruti Samiti (HJS) about immersion of Ganesha idols in flowing water as per Hindu Dharma-shastra. As a result, all devotees immersed idols in flowing water of ‘Neera Ujba Canal’.

1. A pit was dug on the ground of Yashawantrao School near canal; but it was not filled with water; besides, nobody was present there to appeal to devotees against immersion of idols in canal. Employees of Cummins were present in large number to collect dried flowers, leaves etc. offered to idols; but they did not force anyone. They left the place after Shri. Satish Dalvi and Mauli Chavan of Shiv Sena asked them to.

2. Phalatan Town Council had made arrangements for immersion of idols at a water tank erected at Indira Sanskrutik Bhavan owned by Town Council; one employee present there, was asking devotees to immerse idols in water tank; however, none of the devotees paid heed to him.

Baramati, (Dist. Pune) – Local Municipality undertook a drive for donation of idols which was openly condemned by Hindu Janajagruti Samiti (HJS) on 8th September. At ‘Kalwa Ghat’, devotees were explained importance of immersion of idols in flowing water and 70 % devotees responded positively. Few people informed about municipality taking out idols immersed in artificial water tanks and loading them in a tractor. This municipality has been undertaking such drive for past 2 years creating confusion amongst devotees. This year, however, people realized that immersion of idols does not cause water-pollution. Few citizens said that municipality was not doing anything for whole year to prevent pollution.

1. In idol-donation drive undertaken by Baramati municipality, number of fanatic employees was more.

2. Activists of HJS were standing at 5 places to create awareness amongst people. They explained the subject to employees of municipality after which the employees did not come in the way.

3. Sou. Sudha Ghatage explained to 3 Hindu youth wearing ‘Cross’ at ‘Maalaavar chi Devi’ about the subject after which they immediately removed ‘Cross’. One municipal employee was explained about importance of chanting, spiritual practice etc. when he showed interest in buying books on the subject.

4. One fanatic employee asked a devotee immersing idol in water tank at ‘Teen Hatti Chowk’, to immerse it in flowing water.

6. Before arrival of HJS activists, 2 tractors were full of idols donated by devotees at Kasaba; but as HJS activists came and explained importance of immersion to devotees, they carried idols for immersion at ‘Teen Hatti Chowk’ which was at a distance of 1 km.

Congratulations to pro-Hindu activists from Kodoli-Kolhapur !!!

Kodoli-Kolhapur (Maharashtra) : So-called environmentalists from Panhala taluka were taking out idols immersed by devotees in the canal and were showing them to other devotees as donated idols. This is how they undertook their idol-donation drive. When pro-Hindu activists came to know about the happenings, they opposed this with unity and stopped the wrongdoings. Later, these pro-Hindu activists immersed Ganesha-idols as per spiritual science (Dharmashastra). (Congratulations to pro-Hindu activists from Kodoli; for opposing idol-donation drive as it is against Dharma ! – Editor, Dainik Sanatan Prabhat)

2. Few environmentalists and ‘Ramkrushna Pratishthan’s Shri. Deshmukh alongwith 15 men were seen taking out idols immersed in the flowing water by devotees (in accordance with spiritual science). They were kept on a side in the name of donation of idols.

3. They were trying to persuade young Ganesha-devotees by misleading them that immersion of idols caused water-pollution. They were showing idols taken out by them from water to devotees as idols received by them as donation. (As per Dharma-shastra, it is right to immerse idols in flowing water. Immersion of idols does not cause pollution; in fact, the ‘pavitrakas (holy particles)’ charged with Sri Ganesha principle flow to far off places along with water and more number of people are benefited. Devotees should therefore, teach a lesson to these so-called environmentalists for misleading people. – Editor, Dainik Sanatan Prabhat)

4. Pro-Hindu activists present there, noticed what the so-called environmentalists were doing and they strongly opposed to such hideous act; stopping them from doing such things.

5. Those, who are opposing to immersion of idols in water, will tomorrow, oppose to even installation of idols. Pro-Hindu activists, viz. Shri. Ram Gawali, Shri. Raja Patil, Shri. Tanaji Patil, Dr. Nitin Kothawale etc. asked these environmentalists as to why did they think of noise and water pollution only during Hindus’ festivals; but they kept mum on pollution taking place throughout the year through effluents of factories and sewage water mixed with river water ?

6. Out of 70 idols collected in the name of idol-donation, 20 idols were re-immersed by pro-Hindu activists; therefore, environmentalist, Deshmukh called police; but they could do nothing as what pro-Hindu activists were saying, was true. Then, Deshmukh got a tractor and carried the remaining idols.

Pro-Hindu activists present on the occasion !