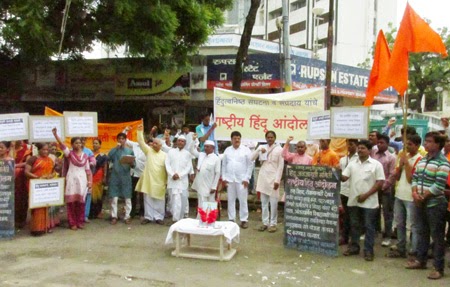 Haribhakta Parayan Varsalekar Maharaj advised Hindus to offer collective prayers to God for elimination of demon in the form of love jihad and to be ready for struggle. BJP’s Shri. Rajumama Bhole said that we should help a Hindu sister whenever we come across a case like her repression. Every Hindu should at least protect his own family. Shiv Sena’s Shri. Tiwari said, “When few devout Hindus tried to save daughters of parents who are working in Government Administration, police created obstacles.” (Police, supposed to be saviours of people, have become destroyers. Such policemen will be asked to undertake rigorous spiritual practice by way of punishment in Hindu Rashtra. – Editor, Dainik Sanatan Prabhat)

Sanatan’s H.H. Nandkumar Jadhav said, “Fanatics are deceiving Hindu girls as they lack culture and Dharma Education (Dharma-shikshan). They are forced in prostitution; some are even trained in carrying out terrorist activities. When the disaster of love jihad is striking us so hard; it is very unfortunate that the Central Home Minister of this country is ignorant of the whole issue of love jihad. Now, Hindus have to get ready to protect Hindu girls from love jihad.”

Highlights : 5-6 fanatics were standing at a distance and keeping an eye on the happenings.

Nallasopara (Thane) – Intense demonstrations were staged under ‘Rashtriya Hindu Andolan’ by different pro-Hindu organizations at ‘Taaki Road Chowk’. Shri. Ashish Dubey, regional Minister of VHP; Shri. Shivkumar Pande, Vasai taluka convener of Bajrang Dal; Shri. Diptesh Patil of ‘Hindu Gou-vansh Raksha’; Shri. Sunil Kadam of Hindu Janajagruti Samiti, Shri. Vaibhav Gawade along with many pro-Hindu activists and devout Hindus were present on the occasion. Shri. Diptesh Patil said, “Love jihad, a conspiracy by jihadis, has spread so much due to Hindus’ apathy towards the same. ‘Dharma-shikshan’ (Dharma-education) will awaken love and respect towards Dharma amongst young Hindu women and only then such incidents will be stopped.” Shri. Vaibhav Gawade said, “Love jihad is not love but it is a disease. This problem needs to be tackled using various means.”

Shiv Sainiks will help Hindu young women and teach a lesson to fanatics for cheating Hindu girls. We rescued one Hindu young woman from clutches of love jihad in Sangli (Southern Maharashtra). Now, every Hindu has to be alert in this respect. Shiv Sena will always be ready to extend help at any level.

Hindus should not get caught in attempts of self- destruction ! – Bhagavatacharya Lata Tiwari

Wardha (Maharashtra) – “Hindu young women, Do not get caught in the sweet talks of fanatics; get up and abide by your own Dharma. Attempts are made to destroy Hindus; but do not be conned”, said Bhagavatacharya Sou. Lata Tiwari. On 14th September, demonstrations were held at Chhatrapati Shivaji Maharaj Chowk for the demand of passing stringent laws for prevention of love jihad.  About 70 devout Hindus joined the demonstrations; including Shri. Ashish Gehlot, general secretary of Bharatiya Janata Yuva Morcha for the district; Sou. Suvarna Kale, Sou. Supriya Abhyankar, Sou. Aparna Haradas of Rashtraseva Samiti; devout Hindus like Shri. Bhimaji Kshirsagar, Shri. Vijay Varghane, Shri. Meghjeet Vaze, Shri. Bhavik Karvatkar, Ms. Shreya Jagadale; besides 22 students of ‘Akhil Bharateeya Vidyarthi Parishad (ABVP)’.

Ponda (Goa) –  “A big gang of fanatics is working throughout the country under a conspiracy in the name of love jihad; wherein non-Muslims and Hindu young women are drawn in dragnet of Muslim youth and they are converted. The Central Government should enact a stringent law to stop such exploitation of Hindu young girls and women. Goa Government should also withdraw the ban imposed on Shri. Pramod Mutalik, the founder of Sriram Sena from entering Goa, as it is against the Constitution”, were the demands in the ‘Rashtriya Hindu Andolan staged at old bus-stand, Ponda on 14th September. Andolan saw participation of more than 100 devout Hindus of pro-Hindu organizations.

Demonstrations started by offering a coconut to Sri Zareshwar, the ‘Sthan-devata’ (Deity of the place) and by blowing conch. Dr. Manoj Solanki, the Goa State Coordinator of Hindu Janajagruti Samiti (HJS) first explained the purpose of holding such demonstrations. Slogans were raised on the occasion to beware of love jihad which was a conspiracy to lure Hindu girls with false love. Later, pro-Hindu leaders addressed the gathering. Shri. Govind Chodankar of HJS presented resolutions at the end which were approved by participants by raising slogans. Shri. Satyavijay Naik did compeering of the program and expressed thanks for support of the people. Members joining the demonstrations were from Shiv Sena, ‘Maye Gram-raksha Dal’, Sanatan Sanstha, HJS and ‘Ranaragini’ branch of HJS.

Demands made through the demonstrations

1. Stringent law should be passed for prevention of conversion of women taking place through deception and prevention of sexual exploitation.

2. There should be provision to give severe punishment to criminals from minority communities; involved in such offence on the basis of statement made by aggrieved girls and their relatives.

3. There should be a provision in the law for non-Muslim married women to get an immediate divorce and claim half property of the man deceiving her.

4. The Central Government should conduct inquiry at high level into funds received from foreign countries for inter-religious marriages, women trafficking and their use for terrorist activities.

Intense demonstrations held to oppose love jihad and for rehabilitation of Kashmiri  Hindus ! 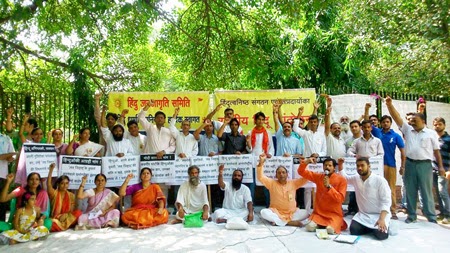 Delhi : There are many proofs of love jihad being an international conspiracy against Hindus. The former Chief Minister of Kerala, Shri. Achyutanandan had accepted existence of love jihad; but why the Central Home Minister is ashamed to accept these facts ? If rulers are not ready to accept existence of love jihad, Hindus will have to establish Hindu Rashtra for eliminating love jihad. Above views were expressed by Shri. Suresh Munjal, State Coordinator of Hindu Janajagruti Samiti (HJS) for Punjab and Haryana while addressing ‘Rashtriya Hindu Andolan’ staged on 14th September at Jantar Mantar here.

1. Ms. Tanuja Thakur, the Founder of ‘Vedic Upasana Peetha’ gave information about rescue of several young women from the clutches of fanatics. She said, “Hindu young women should think that would fanatics, who do not care for their own family, treat Hindu women decently after marrying them ?”

2. Shri. Anubhav Sharma of Hindu Defence League said, “All news channels all the time show whenever any harm is caused to fanatics; but they have forgotten about martyr day of Kashmiri Hindus. They don’t say anything about adverse condition of Kashmiri Hindus.”

3. Shri. Rakesh Kaul Gurkha of ‘All India Hindu Yuvak Sabha’ said, “Kashmiri Hindus should be rehabilitated as early as possible.”

1. Few fanatics went to the venue of agitations and video-recorded the program on their cell phones.(Hindus need to note the alertness of such fanatics ! – Editor, Dainik Sanatan Prabhat)

2. A Hindu, taking part in demonstrations, sponsored distribution of 25 books on love jihad. 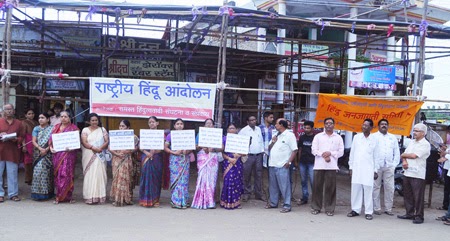 Yavatmal (Maharashtra): Under the auspices of ‘Rashtriya Hindu Andolan’, on 14th September, Hindu Janajagruti Samiti (HJS) staged demonstrations from 4.00 p.m. to 6.00 p.m. at Datta Chowk against love jihad. This created awareness amongst Hindus towards the burning issue. More than 100 Hindus took part in the demonstrations and more than 500 people signed the representation on the issue.

Organizations and their office bearers participating in demonstrations

1. Many young women came forward to sign the representation.

2. Shri. Shrikant Pisolkar of HJS demanded, while guiding the demonstrators, that stringent laws should be enacted for prevention of love jihad.