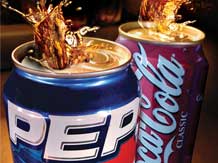 Amid concerns that the Narendra Modi-led government might divert from its core economic ideals, the Swadeshi Jagaran Manch (SJM) along with Rashtriya Swayamsevak Sangh (RSS) has kicked off an “intensive national campaign to rekindle the swadeshi spirit”. The organisation has identified products of multi-national company majors such as Pepsi and Coca-Cola, among others, to be targeted for the campaign.

Launched in mid-June, the campaign aims at promoting products made by Indian companies and discouraging the use of products of multi-national and Chinese companies. Although SJM undertakes such campaigns from time to time, this time around, the Sangh has put its weight behind the Manch to give the drive a push.

When contacted, SJM’s national co-convenor Ashwini Mahajan tried to downplay the development, saying there is “nothing unusual” about the Sangh taking up the swadeshi campaign. “There is no dichotomy between the Sangh and the SJM: Sangh is our driving force. The Sangh machinery could effectively drive home the message to the masses, and that’s why it has pitched in. In the recent Gurudakshina festival, the RSS has given a call in all shakhas to boycott select MNC products,” said Mahajan.

According to RSS sources, this was discussed at the recent Akhil Bharatiya Karyakari Mandal in Madhya Pradesh. This time, the Sangh is taking a “practical approach” to the campaign by targeting a few products. “When you tell people to boycott too many MNC products, it may not be practical. It is always easy to start with a few products and then escalate the campaign,” said senior Bharatiya Janata Party (BJP) leader Seshadri Chari.

Mahajan said the SJM has been running a campaign in certain states such as Rajasthan, Tamil Nadu and Uttar Pradesh against Chinese products for the past two years.

Pamphlets containing the list of items to be boycotted are being distributed across the country. “As a first step, the Sangh is asking swayamsevaks (RSS workers), sympathisers and the public at large to boycott brands such as Pepsi and Coca-Cola in beverages, Colgate and Pepsodent in toothpaste,Lux and Lifebuoy in soaps and some Chinese-made products. We have to start at some point,” said a Sangh leader. However, interestingly, in place of these popular soft drinks, what SJM recommends are milk, buttermilk, juice, lemon juice, Rasna, Frooti, Guruji and jal jeera. Instead of MNC toilet soaps, the Manch advises people to use Yoga guru Ramdev’s Patanjali (Kayakanti), Nirma, Neem, Mysore Sandal, Wipro, Santoor, etc.

In the pamphlet, the SJM, which calls for adopting swadeshi lifestyle to make India prosperous, tells people to use the Indian way of greeting such as “Namaste”, “Om” and “Ram Ram”, instead of “hello”.