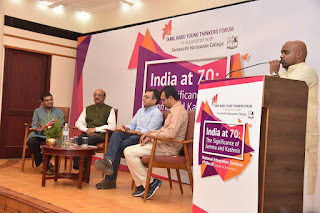 The temple city of Madurai played host to the 3rd seminar of the ‘India at 70’ series by Tamil Nadu Young Thinkers Forum (TNYTF), on October 26, 2017. Organised in association with Saraswathi Narayanan College, the seminar was titled “India at 70: The Significance of Jammu and Kashmir”. October 26 is significant as it is on this date 70 years ago that Maharaja Hari Singh acceded Jammu and Kashmir to the Dominion of India, under a legitimate instrument of accession. 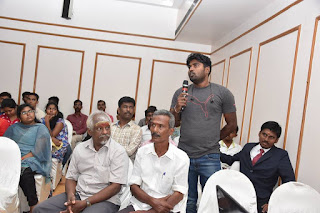 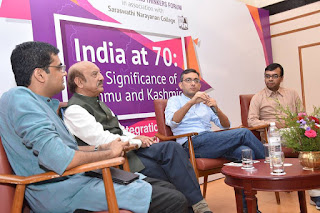 Major General Katoch described the skirmishes that the people of Jammu and Kashmir undergo on daily basis, the sacrifices of the soldiers serving in the region and the co-ordination between the two, despite what might be portrayed by the media. He appealed for the undeterred support of people from across the state and indeed the country, towards a unified Jammu and Kashmir. 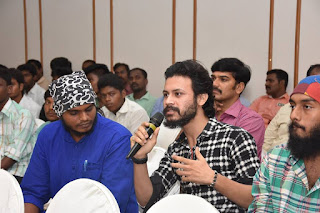 Shri Rahul Pandita, from his exploits as a journalist having reported from war fronts, gave a brief but extremely touching insight into what went on in the mind of a young boy who witnessed the traumatic attacks on the Kashmiri Pandits in 1990, and those that preceded it. His account shared how life was harmonious until the nightmare of January 19, 1989, and what it had brought upon the lives of the Kashmiris. The destruction of their culture and being thrown out of lands that their ancestors had lived in for more than 3000 years, truly speaks of “blood clots on their moon”. It should pain every one of us that we have failed to protect our brothers and sisters while they were made refugees in their own and our own country. Pandita gave a ray of hope that every Kashmiri in exile will complete their vanavas and return home. 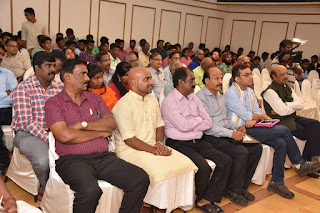 The spirited talk of Ms. Dimple Kaul, started by outlining the relationship between Madurai and Jammu and Kashmir. Her articulate depiction of the history of Jammu and Kashmir and its relationship with every state of India clearly showed that the lives of the people of the valley are intertwined with the very fabric of India and Indians.

Shri Guru Prakash, in his unflinching address, outlined the legal validity of the Agreement of Accession, and its acceptance by world bodies and other countries. Prakash broke down the complexities in Article 370, 35A and the special provisions, for the audience to be able to better understand them. He further explained the need for political will and the larger acceptance of the people of the valley for course correction, and constitutional amendments to turn the wheels around.

The seminar contextualized the spiritual, emotional, linguistic, cultural and historical bonds that bind Jammu and Kashmir with the rest of India. While the state of Jammu and Kashmir has been in conflict for the last three decades, the seminar highlighted that this is but a blip when viewed in the larger historical context. The importance of the state as part of the Indian Union is not just a matter of geography but encompasses the very idea and soul of India.