As per the Mahabharata, Vidura was the half-brother to the kings Dhritarashtra and Pandu of Hastinapura, born the son of the sage Vyasa and Sûdri, a lady-in-waiting to the queens Ambika and Ambalika of the city.

Both Ambika and Ambalika were wives of King Vichitravirya of Hastinapura, who died childless. Anxious to ensure the continuation of the royal lineage, Vichitravirya’s mother Satyavati called another of her sons, the ascetic Vyasa (born through Sage Parashara), to bestow motherhood upon the two widowed queens. Vyasa, as a hermit practicing severe austerities, was unpleasant and even fearsome in appearance, so much so that Ambika shut her eyes tight when she saw him, and her sister Ambalika went pale with fear. Vyasa informed his mother that as a result, the sons they bore would respectively be blind (Dhritarashtra), and the jaundiced (Pandu).

Fearing that no such child would be a worthy heir, Satyavati asked Vyasa to grant another son to Ambika. Still fearful of Vyasa, Ambika sent her lady-in-waiting to Vyasa. This dutiful lady was not frightened by Vyasa’s appearance and bore a normal, healthy, son. Thus, Vidura was born.

Vidura was raised and educated by Bhishma as the half-brother of Dhritarashtra and Pandu. However, since neither of his parents were of the royal blood, he was made counselor to his brothers, the kings, rather than a king himself. When Satyavati asked about her grandchildren’s strengths, Bhishma praised Dhristarashtra’s strength, Pandu’s military prowess, and Vidura’s intellect. When time came for a crown prince to be chosen, it was Vidura who brings up the elephant in the room-namely that despite being older, Dhritarashtra’s blindness made him an unfit king. Vidura then supported Pandu’s election to the kingship, much to the relief of Hastinapur’s prime minister. Despite knowing that he was right, and even agreeing with the verdict, Dhritarashtra held a little bit of resentment towards Vidura for this incident.

Upon Pandu’s abdication and the blind Dhritarashtra’s succession, Vidura took on the reins of government for all practical purposes, guiding his brother’s government until Duryodhana came of age, when he was consigned to a secondary role.

Eldest of them all?

In some versions, it is believed that Vidura is elder to Dhritarashtra and Pandu, for when Bhishma asked Vidura for counsel on the marriages of the three princes, he indicated in order the brides for Vidura – a Yadava girl, Dhritharashtra – Gandhari and Pandu – Kunti, in the order of precedence accorded by age. According to this version, Ambika initially sent a maid in her place out of fear of Vyasa, and the sage perceiving an act designed by destiny for some greater purpose, blesses her with a son, making Vidura an incarnation of Dharma instead of the Mitra-Varuna pair. This event is considered to be a major transition from the Vedic to the Upanishad age. Contemporary translators, however have ignored this due to transcreations. Ambalika later was persuaded to present herself to Vyasa, but turned pale and gave birth to Pandu, as recounted above.

Barring Krishna, Vidura was most respected as an adviser by the Pandavas, whom he forewarned on various occasions of Duryodhana’s plots to exterminate them, such as Duryodhana’s plan to burn them alive in the house of wax. Excepting the prince Vikarna, Vidura was the only one who protested against the humiliation of Draupadi in the Kaurava court. In this moment, Duryodhana viciously rebukes Vidura, calling him ungrateful. Dhritarashtra moves to rebuke Duryodhana for insulting Duryodhana’s uncle, but, remembering Vidura saying that a blind man cannot be king, holds his tongue, and instead reprimands Duryodhana for insulting the prime minister. It is this incident that Vidura brings up years later when he severs ties with the Kurus and sides with the Pandavas at the onset of the Kurukshetra war. Unlike Bhisma, Dronacharya, Kripacharya, Karna, etc., Vidura did not have an obligation to Hastinapur or Duryodhana, but to his family. Hearing Dhritarashtra not acknowledge that relationship, Vidura feels compelled to side with dharma and the Pandavas.

According to Krishna, Vidura was considered as Dharmaraja, which means the lord of truth. Krishna respected Vidura for his devotion to people’s welfare, and his proficiency in every sphere of knowledge.

When Krishna visited Hastinapura as a peace emissary of the Pandavas, he shunned Duryodhana’s offer to stay in the royal palace, preferring instead the home of Vidura, on account of him being the only neutral man in the Kaurava court. The reason Krishna stayed in Vidura’s chambers for the night instead of Duryodhana’s is due to the thoughts which were running through their heads and the difference between them. When Krishna had come to Hastinapura, Duryodhana had presented him with a gracious welcoming committee, with the palace was decorated extravagantly for his arrival. A huge feast was also set up so that Krishna may eat to his heart’s desires and may find what ever it was that he craved to eat. Upon arrival, however and to Duryodhana’s disappointment, Krishna bluntly refused to eat or stay in his chambers for the night. 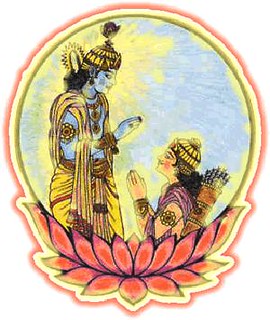 The reason he refused so instantaneously is because the reason which harbored inside the mind of Duryodhana. His intention was to give all the pleasures of food and welcome Krishna like a king to slowly convince him to join the side of the Kauravas. He had a plan to destroy the Pandavas and their growing army, the best way to do this was to bring Krishna onto their side. Sensing this intention, Krishna refused. Krishna knew the food that Vidura presented was presented with love and affection. Vidura truly wanted Krishna to reside in his house for the night before leaving because he truly loved his friend. Krishna also mentioned that there would be two reasons that he would stay in someone’s house, if the food was presented with love and also if he was hungry. He was neither hungry nor was the food presented to him with the best intentions of love, so Krishna declined Duryodhana’s invite and stayed at Vidura’s house. After the great battle, Yudhishthira appointed Vidura the prime minister with complete control of the government. However, following the carnage of the war and his own age, Vidura did not have the heart to govern. Soon after, he retired to the forests as an ascetic with Dhritarashtra, and his sisters-in-law Gandhari, and Kunti. He undertook severe penances, and was the first of the royal ascetics to die. Vidura is considered as the Mahachohan in the Theosophical world. Mahachohan is said to be the chief of a Social Hierarchy of the trans-Himalayan mystics.

Vidura-niti, or Vidura’s Statecraft, narrated in the form of a dialogue between Vidura and King Dritrashtra, is considered the precursor in some ways of Chanakyaneeti. 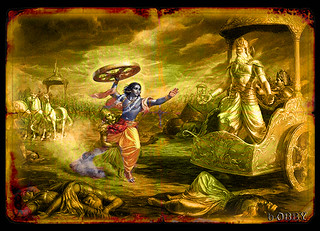 Vidura is held to be a paragon of truth, dutifulness, impartial judgement and steadfast dharma. He is considered the embodiment of the inner consciousness of the Mahabharata.

Mandavya was a sage, who was wrongly punished by the king by being impaled. This occurred as the chief of a band of robbers had hidden their stolen goods in a corner of his hermitage when he was in deep contemplation, and he was wrongly assumed to have stolen the goods.

Lord Yama gave him this punishment for having tortured birds and bees in his childhood. In response, Mandavya cursed the Dharma, as his punishment exceeded the sins committed as an ignorant child. Therefore he cursed him to be born in the mortal world. He was born as Vidura, the wise, to the servant maid of Ambalika, wife of King Vichitravirya, who offered her to Sage Vyasa in place of Ambalika. I just love the character of Vidura, as he was more unlucky than even Karna. However, his steadfast devotion won him the love of Lord Krishna.