The tenth HMEC was held at Port of Spain, Trinidad, at the Radisson Hotel from October 2 to 4, 2015. This was the first time ever in the Caribbean and it proved to be a tremendous success. The conference sessions were well received by both foreign and local (Caribbean) delegates. One of the highlights of the conference was a Gala Dinner and Cultural Evening held at the Divali Nagar in central Trinidad. This program showcased ancestral Indian dance, folk songs, music still practiced by today’s youth – sixth generation born Hindu Trinidadians. Foreign delegates also opted for local tours of both Trinidad and Tobago.

The theme of the conference was: Strengthening the Hindu Family. HMEC 2015 provided a platform for stakeholders like mandirs, other Hindu organizations, pandits, gurus, teachers, sants, sanyasis, scholars, activists, and practitioners and non-practitioners to celebrate, plan, implement, monitor and evaluate the state of Dharma in North America and the Caribbean and come up with strategies and action plans.

In the inaugural session on Friday, 2 October, Swami Dayananda Saraswati Ji’s video message from the past was played. His inspiration was the prime motivator for HMEC and stressing the importance of all Hindu temples working together. A moment of silence was observed in his memory. 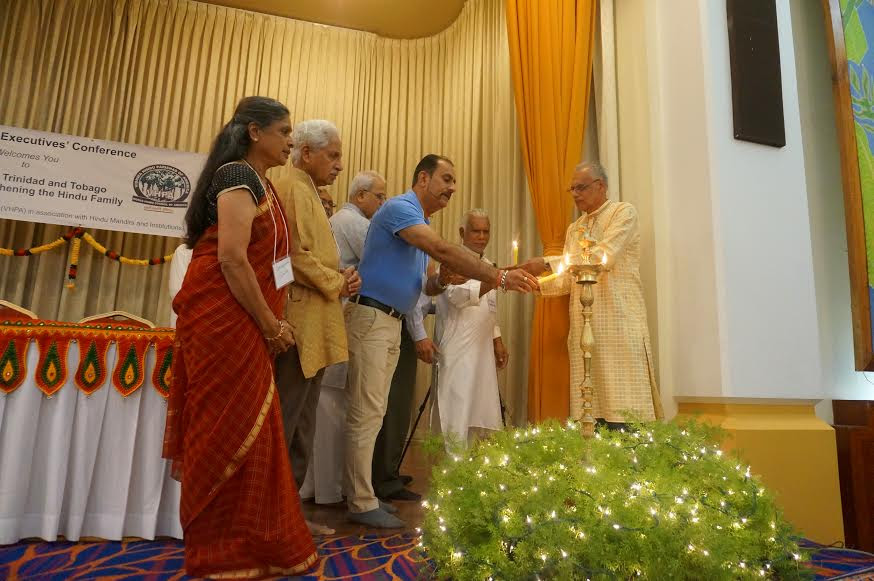 In his welcome remarks, Shri Sat Maharaj of Trinidad summarized the history of migration of Hindus from India to the Caribbean island starting in 1838.  Vallabha Tantry of MN Hindu Temple stressed the importance of family’s role in educating and exposing children to our Dharma and explaining rituals.Fred Stella of Michigan cited and decoded Pew Research’s recent reports on the challenges that Abrahamic and Dharmic faith traditions are facing to retain their nextgeneration in their fold. Dr. Vindya Vasini Persaud of Guyana spoke on the Hindu Women’s role and contribution to the family and society. Pt. Roopnauth Sharma of Ram Mandir Canada spoke about the science behind a successful marriage. In his inaugural address, Swami Pratyagbodhananda of AVG spoke on ‘Strengthening the Hindu Family.’ The session ended with closing remarks by Gauri Shankar Gupta, High Commissioner of India to Trinidad and Tobago.

Since its inception, HMEC has bred many worthwhile projects and initiatives. A summary was presented to share progress with the audience. Among them are: HMPC (Hindu Mandir Priest Conference), CHY (Coalition of Hindu Youth), Publication of Sanskar books, Hindu Seva Diwas: For a number of years, Blood donation and Bone Marrow Drives have been conducted through the mandirs which is led by Dr. Rahul Jindal of DC, HAVAN (Hindu American Vanaprasthi Network), Hindu Chaplaincy program, Sanatana Dharma Scholarship for youth. 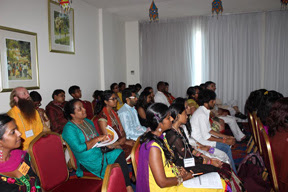 A number of parallel sessions were held to cover large number of important and relevant topics. The moderators and the presenters were from the Caribbean islands, US, Canada and India. The titles included:

·        Sustaining the family structure (in the foreign lands)

Additionally, there were three sessions for the Youth, designed and conducted by the youth. The topics included were: Planning and Readying for Marriage, Understanding the Family Model and Parenting, Progressive Awakening of Latent Hindu Faith, South Asian Syndrome, Dharma & Mental Health, Living as a Hindu and Identity crisis, What it means to be a Hindu, and Conversion.

The tenth HMEC deliberated on the following five resolutions:

1.     HMEC with Hindu organizations’ support in North America and the Caribbean will set up a task force comprising of Hindu educators and specialists such as psychiatrists to assist the leadership in Guyana, Surinam, Trinidad and nearby smaller islands.

2.     HMEC approves the formation of a group of legal practitioners including lawyers and mediators from Canada, USA and the Caribbean to assist Mandirs and Hindu organizations in these countries.

3.     HMEC appeals to the governments of Andhra Pradesh and Telangana to give Hindu Temples and other Hindu religious institutions the same privileges that are accorded to Churches and Mosques.

4.     It is hereby resolved by HMEC that every Mandir in NA and Caribbean should have a Teacher (Acharya) just like they have a priest. The teacher should be able to provide education and also answer questions related to puja, rituals and Hindu Dharma in general.

5.     It is hereby resolved by HMEC that Mandirs should come together and conduct a collaborative seva project in India.

Mandir representatives from Atlanta, GA and Indianapolis, IN announced the hosting of HMEC 2016 and HMEC 2017 in their respective areas. The concluding thoughts were delivered by Swami Parmeshwarananda of Guyana.

The vision of HMEC is to be the network of Hindu Organizations for effective leadership generation to generation In North America. Representatives from Hindu temples meet to deliberate and solve issues collectively. This conference provides a great opportunity to community leaders to learn from each other and ultimately grow as one community. The World Hindu Council of America (VHPA), founded in 1970 and incorporated in the state of New York in 1974, is an independent, nonprofit, tax- exempt and volunteer-based charitable organization serving the needs of Hindu community in USA. It aims to build a dynamic and vibrant Hindu society rooted in the eternal values of Dharma and inspired by the lofty ideal of Vasudhaiva Kutumbakam, i.e. the entire creation is one family.  For more information on VHPA, visit http://www.vhp-america.org/