Hindus demand action against Christian missionaries for converting Hindus in Hospital at Mapusa in North Goa.

It has been stated in the representation that missionaries from ‘Believers’ go to Asilo Hospital and try to convert Hindus by telling them following things.

1. Hindu patients will be cured of their ailments if they pray to Jesus and not pray to Hindu Deities, thus misleading Hindus.

2. Books published by ‘Believers’ are distributed for free.

3. Experiences of converted Hindus are narrated and money is offered for conversion.

4. Such things happening in Government hospitals is quite infuriating and ‘Believers’ missionaries should not be allowed to enter hospital so as to prevent such things. Boards should be displayed at the entrance of hospital to the above effect and stringent action should be taken against persons violating the rules. Distribution of their propagating material such as books, handbills etc. should be banned. Boards with above instruction should also be displayed at the entrance.

5.Representatives of ‘Hindutvavadi’ organizations observed a big statue of Mother Mary and donation box kept in front of the same; so also ‘cross’ and symbols of Mother Mary kept at different places in the hospital.

6. Our Government is secular and pro-Hindu organizations demanded to stop propagation of a particular religion in Government hospital when the Superintendent of the hospital promised to take necessary action in that context.

(There are majority Hindu employees in Govt. hospitals but those who make noise when religious act like Shri Satyanarayan Puja is performed in hospital, never say a word about the illegal conversions openly carried out in hospitals ! – Editor, Dainik Sanatan Prabhat). 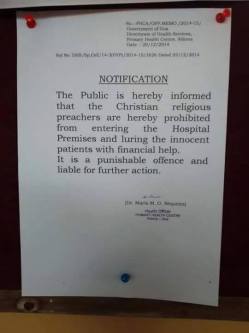 Earlier, such conspiracy of Christian missionaries was detected at another hospital in Goa in the month of Dec 2014.

Then a notice was found nailed  on the wall of the Primary Health Center (PHC) in Aldona (a village in North Goa, Sub-district- Bardez, 20 km from Panaji), banning Christian preachers from entering the health centers. It was ready to serve to all PHC in Goa.

But, Health authorities were later forced to `withdraw` the notice after its pictures went viral on the social media. Actually, The notice, signed by Maria M.O. Sequeira, a health officer working at the primary health center in Aldona, vide PHCA/OFF. MEMO/2014-15/ dt. 20/12/2015, approved by Ref No. DHS/ Sp.Cell/14-3(HVP)/2014-15/1626  dated. 23/12/2014, was issued to restrain Christian preachers from the said PHC from  “luring the innocent patients with financial help”.

There so many tactics which are adopted by the missionaries in India to convert Hindus into Christianity+.

But  with a very decisive effort, Hindus can challenge Christian Conversion and  Missionaries legally and effectively+.