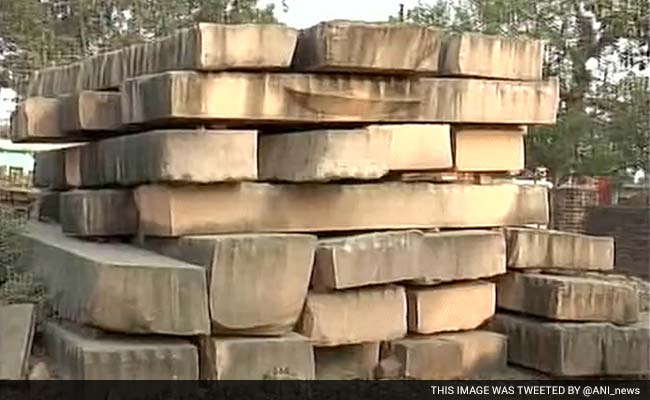 AYODHYA:  Almost six months after the Vishwa Hindu Parishad (VHP) announced its nationwide drive to collect stones for construction of Ram Mandir in Ayodhya, two trucks of stones arrived in the temple city on Sunday.“Two trucks of stones have been unloaded at Ram Sewak Puram, a VHP property in Ayodhya, and ‘Shila Pujan’ (praying of the stones) has been performed by Mahant Nritya Gopal Das, the president of Ram Janam Bhumi Nyas,” VHP spokesman Sharad Sharma said. Meanwhile, Mahant Nritya Gopal Das told PTI that there was a “signal” from the Modi government that the temple will be built “now”.

“Now, the time has come for the construction of Ram Mandir in Ayodhya. Lots of stones arrived today in Ayodhya and their arrival will continue. We have signals from Modi government that Mandir (temple) construction would be done now,” he said. Reacting to the arrival of stones at the VHP headquarters, Faizabad Senior Superintendent of Police Mohit Gupta said that the police was monitoring the situation.

“We are monitoring all the developments minutely. Stones have arrived and being kept in a private premises. Due to this development, if their was any breach in peace or communal harmony we will definitely take action,” he said. Asserting its resolve to build the Ram temple, the Vishwa Hindu Parishad had in June announced a nationwide drive to collect stones for construction of the temple. “About 2.25 lakhs cubic ft of stones are required for the construction of the Ram temple and about 1.25 lakh cubic ft of stones are ready at the VHP’s headquarter in Ayodhya.
The rest one lakh cubic ft stones would be collected nationwide from Hindu devotees,” VHP leader Ashok Singhal, who died last month in Gurgaon, had said. The announcement had met with a quick reaction from the administration, which had said that it would oppose the move as the matter was sub judice. Principal Secretary (Home) Devashish Panda had said that the Uttar Pradesh government would not allow arrival of stones in Ayodhya for construction of Ram Temple. “Since the matter is sub judice, the government will not allow starting of any new tradition regarding Ayodhya issue,” he had said.