As Congress president Rahul Gandhi and BJP chief Amit Shah packed mutt visits into the campaign trail, here are ones with special significance in an election year:

* Important for Lingayats, the largest votebank in the state (17-19% of the population)
* Currently headed by Swami Shivakumara, who turned 111 in April this year. He is considered the community’s ‘walking god’

* Usually supports BJP and Yeddyurappa, a Lingayat, but chief minister Siddaramaiah may have rocked that boat by promising separate minority status to Lingayats
* All Congress and BJP leaders jostled to get blessings from the pontiff on his birthday. Rahul Gandhi and Amit Shah made special visits
* Other major Lingayat mutts are the Srigere Mutt, which influences the entire district, and the Murugha Mutt, both in Chitradurga district
* When Shah visited Murugha Mutt in March, he was taken aback when the pontiff handed him a memorandum seeking approval for minority religion status tag for Lingayats 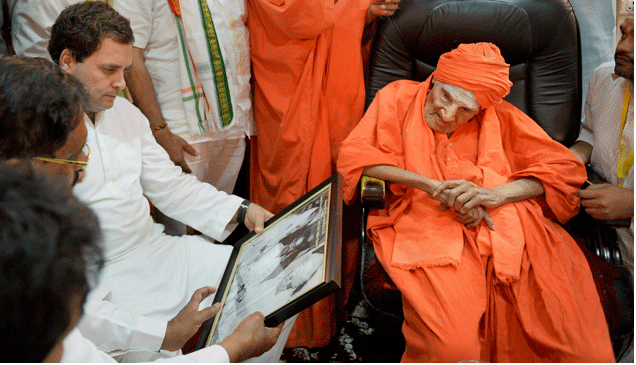 Mutts, Dalits and Muslims: How Congress and BJP are wooing voters in Karnataka

* Followers mainly from the most marginalised Madiga sections of Dalits. The 1.5 crore Madigas are an influential votebank
* Headed by Madara Chennaiahswami

* Community seeking internal reservation in SC quota. Siddaramiah formed a Madiga development corporation, which hasn’t worked well
* The pontiff’s been feuding with welfare minister H Anjaneya, earlier the mutt’s treasurer
* Amit Shah has tried to woo the seer and break the chief minister’s Ahinda votebank
* PM Modi mentioned the founder, along with the state’s historical figures such as Kittur Rani Chennamma and Sangoli Rayanna, in speeches

* Important for Vokkaligas, which is the second-largest caste in Karnataka (12-15% of the population)
* Currently headed by Swami Nirmalanandanath, MTech (IIT-M)

* Supports Congress and JD(S)
* Yogi’s sect; Rahul Gandhi made a trip. Amit Shah also visited last year but ended up angering disciples by sitting with legs crossed in front of the pontiff

NOT ON CONGRESS RADAR

* Said to favour BJP. Amit Shah visited the mutt in February, but the mutt said it was disappointed the Prime Minister didn’t visit
* Rahul Gandhi has not scheduled a trip to the town or the mutt
* CM Siddaramaiah has avoided a visit since it had differences with the Kurubas over the demolition of a gopura of another major mutt in Udupi in 2004

* Important to the Kurubas, the third largest caste group in Karnataka, and the one to which CM Siddaramaiah belongs Early in April, both Rahul Gandhi and Amit Shah turned up on the same day to meet the pontiff, Niranjanananda Swami. The pontiff — who’s been vocal about his support for the Congress party — decided to travel to Belludi in Davangere to meet the Congress president and Siddaramaiah, leaving senior seers to greet the BJP president. BJP leader KS Eshwarappa, who belongs to the Kuruba community, reportedly got a earful from Shah. Niranjanananda later said he’d made the appointment to meet Rahul and the CM earlier though he added that he’s disappointed with the way the BJP treated Kuruba neta Vijayashankar.