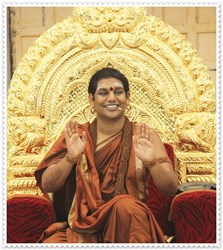 “All your thinking, all your actions, all your feeling can be aligned with enriching, the moment you convince your heart – ‘Life Is For Others’ “

On Oct 27th, as a landmark event in history of Hinduism worldwide, Paramahamsa Nithyananda gifted 5000 copies of Bhagavad Gita from Nithyananda Vedic Temple & Nithyananda Meditation University in Los Angeles and announced the free distribution of 1 million Bhagavad Gita copies as a gift to all businesses, seekers, followers from any part of the world, to anyone interested in learning about Hinduism.

Paramahamsa Nithyananda said, in his live discourse, “This Bhagavad Gita is the complete essence of Hinduism. Whatever best things Hinduism has is collected and incorporated in this book by the greatest incarnation on planet earth Sri Krishna. It is so beautiful to read, it is really, really nectar.”

In his live speech on the occasion of the Hindu Open House, Paramahamsa Nithyananda, on behalf of the Nithyananda Sanga worldwide thanked the California Government, the State senate Majority Leader Ellen Corbett, and all the contributors who were responsible for the SCR 32 which designates October 2013 as California Hindu American and Appreciation Month in recognition of the significant contributions made by Californians of Hindu heritage to the state.

All the US senators will also receive a shipment of the copy of the sacred Bhagavad Gita as a gift in honor of the Hindu American Awareness & Appreciation Month.

In the same event, Paramahamsa Nithyananda announced that any hotels, motels, resorts, lodges, hospitals, offices are welcome to call and get any number of copies of the free Bhagavad Gita book to be placed in as many hotel rooms, hospital beds, offices and businesses.

Paramahamsa Nithyananda said, “Hinduism is all about love, colorful vibrant celebrations, laughter, radiating joy, and all of us have to take the responsibility of sharing this with the world.” He also said that the values about the basic beliefs one carries about life and the world taught by Hinduism which one learns from one’s parents and upbringing has really helped in making the Hindu community reap success.

Paramahamasa Nithyananda said, “The NRI’s [Non Resident Hindus] in the U.S. are the most fortunate people on planet earth because they have the best things of inner world which is Hinduism, and best thing of outer world which is the US infrastructure.

About His Holiness Paramahamsa Nithyananda:
His Holiness Paramahamsa Nithyananda revered as a living divine incarnation by millions worldwide, is the 44th pontiff of the Mahanirvani Peetha, the most ancient apex body of Hinduism, as well as the 293rd pontiff of the Madurai Adheenam, the oldest monastery. He is the most watched spiritual teacher on YouTube with over 16 million views, and the author of more than 200 books published in 26 global languages. His talks are telecast live on http://www.Nithyananda.TV, everyday on multiple international television channels, two way video conferencing and Internet. Nithyananda has been named among the world’s top 100 most spiritually influential personalities of 2012. He is a world-renowned spiritual healer as well as scientist who has successfully demystified the yogic sciences like kundalini awakening, levitation, materialization, anti-ageing, etc.