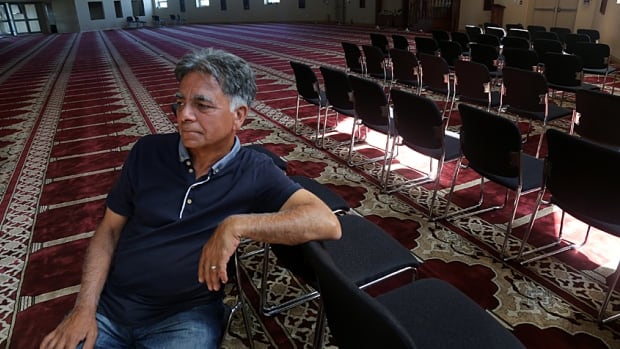 “We had people sleeping at the mosque every night,” says Javid Mirza, former president of the Muslim Association of Hamilton, after the Hindu Samaj Temple arson. “Young guys from our community were sleeping, 20 or 30 of them, with bats.” (Samantha Craggs/CBC)

Neelam Tandon: The temple was a big part of our family0:23

He’d been awakened by a phone call. The Hamilton Mountain mosque was on fire, the caller said — the same mosque where Mirza had volunteered for years. A mosque he’d feared for since the 9/11 attack four days earlier, when terrorists had flown two jets full of passengers into the World Trade Centre.

Mirza raced across the Mountain. When he got there, he said, he found someone had thrown a Molotov cocktail through a window, but it hadn’t exploded.

‘I believe people were sincere 15 years ago. I think the intent was there.’– Hussein Hamdani

“The fire is at your other mosque,” a police officer said. “The one on Twenty Road.”

The officer, it turned out, made the same mistake as the culprits who set fire to the Hindu Samaj Temple — they thought Muslims worshipped there. But the intention was clear. This was about prejudice. And in the aftermath of the shocking arson that destroyed the Hindu temple, widespread efforts began to make Hamilton more inclusive so this would never happen again. 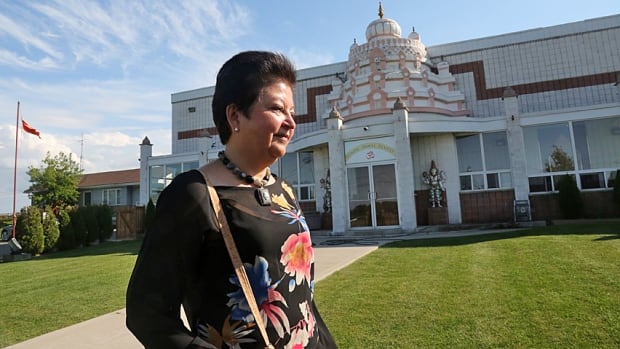 Neelam Tandon of Ancaster says for months after the arson, she told her 20-year-old daughter not to go to local bars or clubs for fear she’d be harmed. (Samantha Craggs/CBC)

Fifteen years later, many say the city hasn’t come as far as anyone had hoped. Muslims are still threatened. The city ranks second per capita in Canada for hate crimes. Hamilton’s positions of power, from its city council to its senior police officers, remain stubbornly white bread.

‘We asked, how could it happen here? What had we done to deserve this?”– Mani Subramanian

Hamilton police face criticism over street checks/carding that disproportionately target minorities. And while the city has successfully settled more than 1,000 Syrian refugees, reports still surface about landlords unwilling to rent to them.

“I would give Hamilton a B,” said Hussein Hamdani, a local lawyer who volunteers with Muslim youth.

“I believe people were sincere 15 years ago. I think the intent was there. But the results have been less than what we all would have wanted when we started this.”

Most people involved, such as Mirza, vividly remember Hamilton’s “9-15.” The fire caused more than $500,000 in damage. It also destroyed the sacred religious icons within. And it forced a city to examine itself. 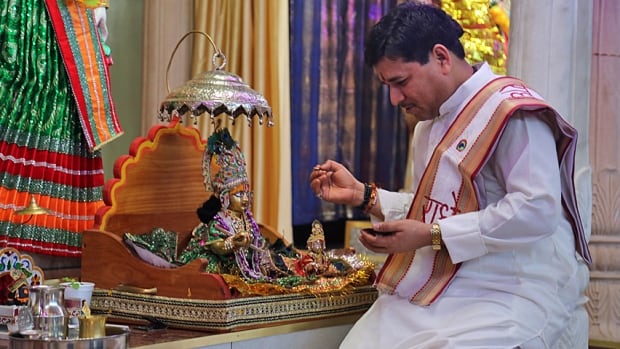 “I remember quickly putting on some clothes and darting right over there,” said Tom Jackson, Ward 6 councillor, who was acting mayor that week. The racial motivation, he said, was “immediately apparent.”

‘Quite quickly, the story became about how the community came together.’– Sheila Copps

“We asked, how could it happen here?” he said. “What had we done to deserve this?”

Hamilton was portrayed as a “hick town” in international news, said Evelyn Myrie, a local diversity advocate. Fundraising began to rebuild the temple. Posters were created with the phrase “An attack on one is an attack on us all.”

Then-mayor Bob Wade started the Strengthening Hamilton Community Initiative, which led to the Hamilton Centre for Civic Inclusion (HCCI). The HCCI’s was born to be a hub for diversity issues in the city — to train those who need it, to give information to those who want it, to “address issues of racism in the long term,” its website says. Hussein Hamdani: They thought it was a mosque

“Quite quickly,” said then-MP Sheila Copps, “the story became about how the community came together.”

But by nearly all measures, racism and xenophobia is still an issue here.

Statistics Canada figures from 2013, for example, show Hamilton has the second highest number of hate crimes per capita, behind Thunder Bay. 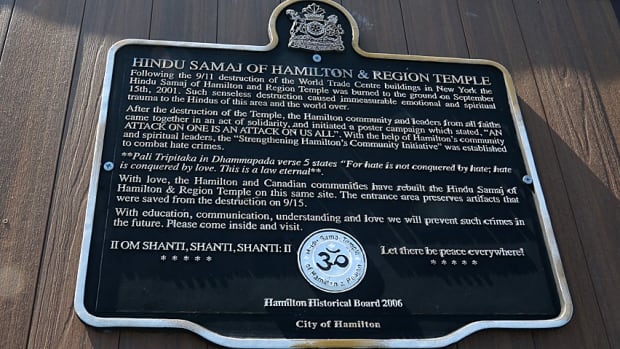 The plaque outside the Hindu Samaj Temple bears what became Hamilton’s mantra in 2001 – “An attack on one is an attack on us all.” (Samantha Craggs/CBC)

‘When I was being treated badly at first, I would come home and cry. But then I decided that no, that is wrong.’– Neelam Tandon

But residents are concerned too.

He found that more than 70 per cent of Beasley residents said racial prejudice exists in Hamilton. Incidents most commonly happened on the street, he said, followed by at school, in local stores and while looking for housing. Matthew Green: It demonstrated how ordinary Canadians can also take on extreme views

Others point to the lack of non-white faces local boards and councils, and HPS’s upper ranks. The service itself fares better than most for racial diversity. There are 17.2 per cent of officers who identify as Aboriginal or of a visible minority, compared to to 17.7 per cent of Hamilton’s population in 2011.

‘We’re still having a values conversation about whether we are who we say we are.’– Coun. Matthew Green

But Hamdani says few have advanced beyond “the bottom two rungs.” Fifteen years later, “you’d expect to see some progression.”

HPS has fielded other criticisms too, namely over its use of street checks, also known as “carding.” Statistics show the practice disproportionately targets racial minorities. CBC Hamilton found that one Aboriginal man was carded 14 times in one year.

The service is revamping its street check rules, as per provincial mandate. But Matthew Green of Ward 3, Hamilton’s only black city councillor, says the all-white police services board is too “culturally incompetent” to have such a complex conversation. Evelyn Myrie: We’re more than that

Myrie said with police and others, diversity efforts often rest with individuals rather than in permanent policies, which is “doing half a change.” She also sees a whitewash in who receives city arts funding.

In 2014, for example, the biggest recipients of arts funding were the Art Gallery of Hamilton, the Hamilton Philharmonic Orchestra, the Brott Music Festival and the Festival of Friends — events Myrie and others characterize as not representing diverse art.

“This is an issue that I have personally with Hamilton,” said musician Kojo “Easy” Damptey last year. “Everything that’s done in the arts tends to be white. It doesn’t depict other cultures that are in the city.”

Otherwise, Hamilton’s mixed results cna also be found in the stories of individuals. In 2009, for example, someone posted one of Hamdani’s newspaper columns outside his work with the eyes of his headshot gouged out.

There are other incidents too. Last year, for example, someone spray-painted a man’s car with an “anti-Arab statement,” and slashed the tires and smashed the windows. 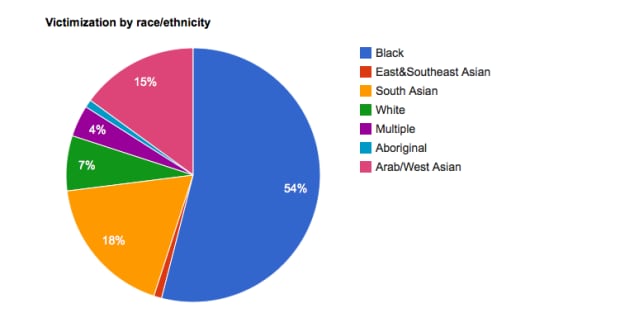 Hamilton’s black community was the most targeted among racially motivated hate crimes in 2014. Arabs/east Asians were targeted in 15 per cent of those incidents. (CBC)

“I’m not asking for a world free of racism,” Hamdani said. “That’s a high standard to achieve. I’m asking that we live in a world where everyone feels included.”

Neelam Tandon is a temple member who worked with Copps to organize a 2001 fundraiser to rebuild the temple.

After 9-15, she said, she wouldn’t let her 20-year-old daughter go to bars for fear she’d face violence. Fifteen years later, the fear remains.

Muslim friends tell Tandon about comments their kids suffer at school. Sometimes, shopping as a person of colour is still “just like Pretty Woman,” she said, referring to the scene where sales people won’t wait on the main character.

Years after the temple burning, Tandon said, her vehicle at her Ancaster home was repeatedly vandalized. She doesn’t know why. But she knows what sets her apart from her neighbours. 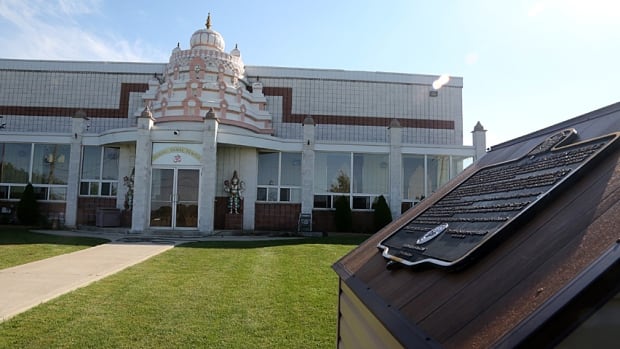 People need to speak out in each and every case of racism, she said. Because it’s not over.

“When I was being treated badly at first, I would come home and cry,” she said. “But then I decided that no, that is wrong. I’m going to fight.”

In the end, it took 12 years for police to charge three people with the temple fire. All three pled guilty to the lesser charge of mischief. And all three were sentenced to three years’ probation and 80 hours of community service, as well as ordered to make a $10,000 donation to a charity of their choice.

Green said North America — and by extension, Hamilton — is at a turning point. He cites numerous reasons, including the presidential election “45 minutes to the south,” where Republican candidate Donald Trump has pledged to deport illegal immigrants, build a wall between the U.S. and Mexico and have Muslims register with the government.

“We’re still having a values conversation,” he said, “about whether we are who we say we are.”