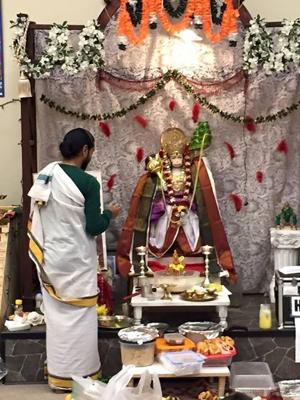 Since 2007, more than 10,000 people have gathered at Mandir of Madison in the Town of Burke to worship, socialize and preserve cultural traditions.

It seems like an unlikely spot for a Hindu temple— a refurbished auto body repair shop in a small Wisconsin rural community.

But sure enough, stepping inside, all the Chevys, Fords and Cadillacs have been replaced by Shiva, Vishnu and Ganesha.

Since 2007, more than 10,000 people have gathered at Mandir of Madison in the Town of Burke to worship, socialize and preserve cultural traditions.

It was the vision of Jagdish and Manjesh Agrawal, both originally from northern India, to bring together the Hindi community. After relocating from Michigan, the husband and wife team couldn’t find a nearby temple to fit their needs, so they started one with the help of dedicated worshippers.

“The Indian community likes the temples very much, that is the part and parcel of their lives,” says Jagdish Agrawal. “It was a need for the community.”

Family and friends gathered in their Cottage Grove home for “pre-planning meeting” and soon word spread.

With fundraising, the building was bought and extensive renovations took place.

The once drab interior was transformed into a kaleidoscope of colors, with bright flowers, and incense slowly swirling through as Indian music and chanting plays on the stereo.

At one end of the temple, there is an altar with 11 murtis, images expressing a Divine Spirit, where worshippers focus their prayers on.

One of the world’s oldest religions, with more than one billion followers, Hinduism is a blend of religious, philosophical and cultural ideas that originated in India.

The faithful believe in one absolute being that manifest itself in multiple gods. Dharma, (ethics and duties) and Karma (right action) guide Hindi followers who believe in reincarnation, with the ultimate goal of liberation from the cycle of births and deaths.

Since there’s only a handful of Hindu temples in Wisconsin, Mandir of Madison attracts many from southcentral Wisconsin and even Illinois.

“We have this kind of thinking, that any new thing should be started with prayers,” Jagdish Agrawal said.

At the temple, major Hindu festivals are celebrated throughout the year—the birthday of popular deities, the new year and Indian holidays, among others. There’s also cultural activities, language and music classes and youth development programs.

Although it may seem complex to outsiders, Jagdish Agrawal said Hinduism it’s no different from other religions.

“Hinduism is free and open and want to see what you need, spiritually, physically, mentally and financially, that is what the do in church, so we are both are very similar.”

He said the temple welcomes all to explore the Hindu religion.

“New people can come learn, enjoy and pray–that is what it is all about,” he adds.

For more information on Mandir of Madison visit www.mandirofmadison.org.