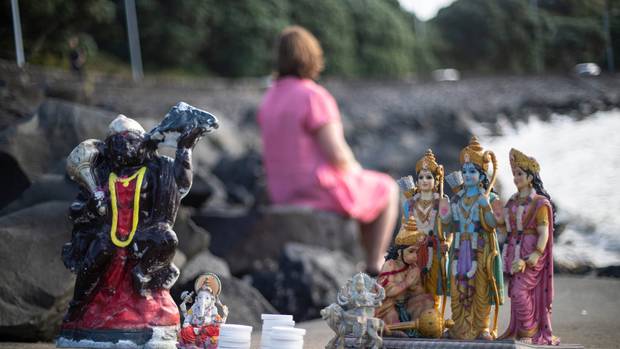 Rebecca at Biddick’s Bay on Tamaki Drive, has been collecting Hindu deities left as rubbish on beaches. Photo / Jason Oxenham

Statues of Hindu gods, goddesses and deities are being discarded at Auckland beaches as part of a religious practice – but concerns are being raised about it posing a risk to beachgoers and wildlife.

An Auckland mother who has been cleaning beaches from Okahu Bay to Glendowie says she has been picking up statues and shards of broken pieces – mostly at Biddicks Bay and Mission Bay.

“Someone could easily cut their feet open stepping on these, and I worry about the birds and animals too that are eating the toxins from the paint,” said the woman, who wanted to be known only as Rebecca.

Auckland beaches are already facing a dangerous litter problem with broken glass, syringes and dumped asbestos among the rubbish picked up by charity group Sustainable Coastlines in the summer.

AUT University Professor of Diversity Edwina Pio said usually after a religious festival or celebration, such as Vinayaka Chaturthi which celebrates the birth of Hindu deity Ganesha, statues were “released” into the sea or lakes.

“The eternal cycle of birth, life and death is symbolised by the immersion of gods and goddesses in water,” she said.

Pio said the practice among Hindus originated with clay idols painted with vegetable dyes, but many idol makers now used non-biodegradable material like plaster of paris, paints and dyes which are not soluble and can cause harm to the environment.

“Casting away idols is also a stark call for religious leaders, communities, local and government bodies to quicken the pace of framing appropriate guidelines,” Pio added.

Rebecca said she has picked up about 30 plaster of Paris and metal figurines of various sizes over a period of about seven years, along with dozens of other religious items such as candelabras, broken pots, and discs with religious writings.

“I found part of a plaster of paris figurine six years ago and continue to pick up parts of the same sequined petal material,” she said.

“Birds and fish are eating the plastic and debris off these pieces.”

Research by Perth’s Murdoch University found that one in five injuries people received while at the beach was caused by rubbish or marine debris. In New Zealand, 595 of the 7800 reported injuries were due to beach litter.

An Auckland Council spokeswoman said it was working with the Hindu Council to develop recommendations on how idols and cultural offerings could be immersed in an eco-friendly manner.

Vinod Kumar, president of the Hindu Council, urged devotees using non-biodegradable idols to simply dip them in the sea rather than set them adrift – which would see the statues float back to land and create pollution.

Hindu devotees could also immerse these idols at home in a large drum of water, he said, or put them in their back garden.

“The deities can be buried in the ground and anything printed on paper can go into the recycling bin,” Kumar said.

Archarya Tiwari, a Hindu priest and scholar, said devotees who put non-biodegradable idols into the sea were “ignorant” and “lacked understanding” of Hindu scriptures.

“The only reason we put these statues into the water was so people don’t step or walk over them, which we consider disrespectful,” Tiwari said.

“But when the statues flow back to shore, and people walk all over them, that is truly an even greater insult.”

Tiwari called on Auckland Council to fund and educational programme for Hindus as a way to stop the practice.

Hinduism is the second largest and the fastest growing religion in New Zealand, with more than 90,000 followers according to the 2013 Census.