Amarnath Yatra this year will begin July 1, and go on for 46 days and will conclude on August 15. The decision was taken by the Shri Amarnathji Shrine Board (SASB), headed by Governor Satya Pal Malik 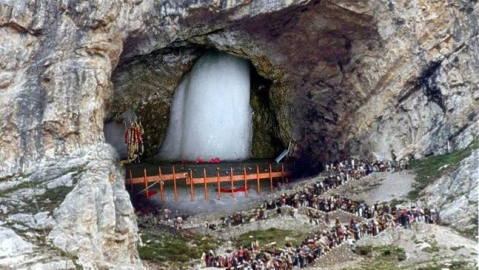 The Amarnath Yatra this year will begin July 1, and go on for 46 days, it was announced here on Thursday.

The decision was taken by the Shri Amarnathji Shrine Board (SASB), headed by Governor Satya Pal Malik, at its meeting at the Raj Bhavan.

A SASB statement said that the duration and date of commencement of this year’s Yatra was based on the approach set out by the Sri Sri Ravi Shankar Committee, set up to advise the Board on the pilgrimage’s duration and schedule.

“The Board, keeping in view the foremost concern of the safety and security of the pilgrims, decided that a 46 day Yatra would commence July 1, an auspicious day of Masik Shivratri as per Hindu calendar, and conclude on Shravan Purnima (Raksha Bandhan) on August 15,” it said.

It said the board deliberated at length on the number of Yatris who would be allowed to register, date-wise and route-wise, for this year’s Yatra, and considering the carrying capacity of existing tracks and other available infrastructure, decided that 7,500 pilgrims, per day on each route, would be allowed to secure advance registration.

This would exclude the pilgrims who travel by helicopters, it added.

The SASB said it noted the steps taken by its CEO for registration of pilgrims through 440 designated branches of Punjab National Bank, Jammu and Kashmir Bank and YES Bank and directed all steps be taken to begin advance registration on April 1.

It also approved the proposal for online registration of a limited number of pilgrims per day on pilot basis, in addition to the existing modes of registration.

Taking into account the difficult climate and terrain in the high-altitude region of the Yatra, it requested all pilgrims to prepare themselves fully and make themselves physically fit with regular walks and exercise

The board also directed wide publicity, through electronic and print media, of the need by all prospective pilgrims to secure compulsory health certificates from doctors/ hospitals nominated by the state or Union Territories where they reside before seeking advance registration from the nearest designated Bank, which would issue a Yatra Permit valid for the specified date and route.

It also said that it be widely-known that no one below 13 years of age or above 75 years would be allowed for the pilgrimage, and also appealed to all potential pilgrims to consult their doctors before embarking on the pilgrimage. Taking into account the difficult climate and terrain in the high-altitude region of the Yatra, it requested all pilgrims to prepare themselves fully and make themselves physically fit with regular walks and exercise.

“The Board directed its CEO to take timely steps for ensuring uninterrupted telecom connectivity in the Yatra area during Yatra 2019. Appreciating the important services rendered by the Langar organizations, the Board looked to their continued support during Yatra 2018,” the statement said.

It also said that the awareness campaign would be launched with the cooperation and support of the Ministry of Information and Broadcasting and all information relating to Yatra will be available on its website (www.Shriamarnathjishrine.com).

In view of the Chairman’s call for further improving facilities for the pilgrims this year, the Board reviewed the Action Plan for this year’s Yatra, particularly on arrangements for medical care, sanitation facilities, installation of the railings at all vulnerable points along both routes, and measures to preserve the area’s environment by removal of garbage in a scientific and environment-friendly manner, the statement said.