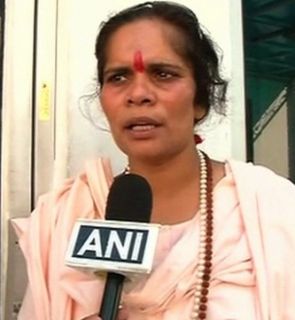 Sadhvi Prachi Arya, a prominent Vishwa Hindu Parishad leader, has said that the ‘Ghar Wapsi’ programme will continue till the fifteen crore people who, she claimed, have left the Hindu fold in the post-Independence years, are “reconverted to Hinduism”.

“The ghar wapsi programme launched by some Hindutva organisations would continue until all the fifteen crore people who have left the Hindutva fold after Independence are reconverted to Hinduism,” Arya said at a convention organised by VHP at the Ramleela Grounds in the old City on Monday night.

She also said that the Father of the Nation title to Mahatma Gandhi was “unwarranted”.

“The title of the Father of Nation to Gandhi was unwarranted because the true sacrifice for attaining freedom was carried out by others,” she said.

“The credit for India’s independence was wrongly attributed to Gandhi when it should have been given to Vir Savarkar and Bhagat Singh,” she said.

Sadhavi said the VHP would also continue its movement to ensure increase in the population of Hindus in India which had been steadily declining compared to others.

“I and Bharatiya Janata Party MP Sakshi Maharaj are receiving threats but we are not scared and would continue working for the rights of the Hindu community,” she said.

The VHP also announced that it would launch a movement for renaming Aligarh as ‘Harigarh’ which, the organisation claimed, was the city’s original name.