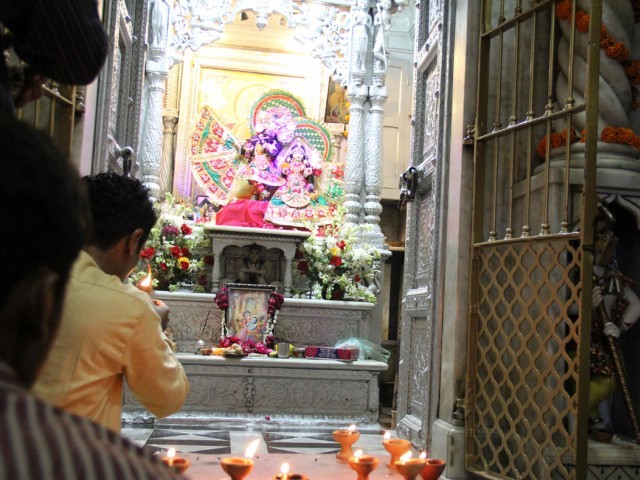 KARACHI: The Hindu community in Sindh celebrated on Monday their holy festival Janamashtmi with traditional fervour. The festival is observed to celebrate the birth of Lord Krishna.

The State Bank of Pakistan also announced an optional holiday for its Hindu staff across the country on the occasion.

Hindu women drew tiny footprints outside doors symbolizing the movement of Krishna on a visit to their homes. Statues of baby Krishna are washed, clothed and placed in a cradle.

Devotees of Krishna also observe fast and end it with sharing food and sweets after observing the moon, said a devotee, Saveena Tharani who was preparing for midnight celebrations that were held on the night between Monday and Tuesday.

Tharani explained that Janmashtami is celebrated when Krishna is believed to have been born according to the Hindu tradition, which is in Mathura, at midnight on the eighth day of the dark fortnight in the month of Bhadon.

Another member of Hindu community, Sooraj Khetpal, observed fast from early morning on Monday till the sighting of moon. Lord Krishna was the son of Devaki and Vasudeva and his birthday is revered and celebrated by Hindus as the third most important religious festival after Holi and Diwali, he said, adding that Krishna is considered as the eighth and most powerful avatar of Lord Vishnu and he was born around 5,200 years ago.

“Lord Krishna was born in an era of chaos, when persecution was rampant, freedoms were denied, evil was everywhere, and when there was a threat to his life by his uncle King Kansa. Immediately following the birth, his father Vasudeva took Krishna across Yamuna, to foster parents named Nanda and Yashoda,” Khetpal said, adding that the legend is celebrated on Janmashtami by Hindus with great devotion and enthusiasm all over the world. People fast and sing devotional songs of love for Krishna.

“The sole objective of Sri Krishna’s birth was to free Earth from the evils. He played an important role in Mahabharata and propagated the theory of bhakti and good karma which are narrated extensively in the Bhagwat Geeta, a sermon by him,” said Dr Jamnadas Balani.

The celebrations reach their peak around midnight as it is believed that Krishna was born on a dark, stormy night to end the violent rule of his uncle Kansa. Members of the Hindu community engage in rituals the whole night and religious mantras are sung in temples around the world that are beautifully decorated and illuminated for Janamashtmi.