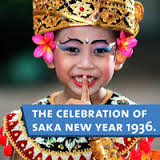 As Balinese Hindus will observe Nyepi (the Day of Silence) on March 31, the highest Hindu council on the island — Parisada Hindu Dharma Indonesia (PHDI) — has issued guidance related to the celebration of the Caka New Year 1936.

“The guidance was the result of the council’s meeting about the sacred day,” PHDI chairman I Gusti Ngurah Sudiana said in Denpasar.

He explained that the series of rituals would be adjusted to the tradition and situation in each desa pakraman (customary village) on the island.

The melasti purification ritual marks the beginning of Nyepi. In this procession, Hindu adherents will bring their pretima (sacred objects) to beaches, lakes or springs that are believed to be sacred, to be cleansed.

Hindus living near the coast should conduct melasti at beaches, while those living in mountainous areas could go to lakes or springs.

After completing melasti, they perform Bhatara Nyejer in the Pura Desa or Bale Agung, the village’s temple, which is followed by Tawur Kesanga, or a ritual of sacrifice on Sunday, one day before Nyepi.

Tawur Kesanga is carried out at several levels, starting from the highest at the island’s mother temple, Pura Besakih, down to the regencies, villages, hamlets and households.

This ritual is aimed at strengthening relations between humans, humans and the environment, as well as humans and God.

Tawur Kesanga ends in the afternoon and is followed the same day by ngerupuk, a street parade with youth groups from villages carrying bamboo torches and ogoh-ogoh (giant effigies in the form of terrifying creatures). Ngerupuk aims at warding off the bhuta kala (malevolent spirits and evil forces).

All of these abstinences target enabling the Balinese to enter a state of self-contemplation, meditation and evaluation of their deeds during the previous year and to pray for the best in the coming year.

All access to Bali will be closed for the duration of Nyepi and only hospitals and emergency services will be in operation. Hotels will also provide suitable activities for their guests.

Beaches will also be closed and tourists are urged to stay inside their respective hotels’ compound.

The implementation of Catur Brata Penyepian will be closely monitored by pecalang (local security guards) deployed by the desa pekraman.