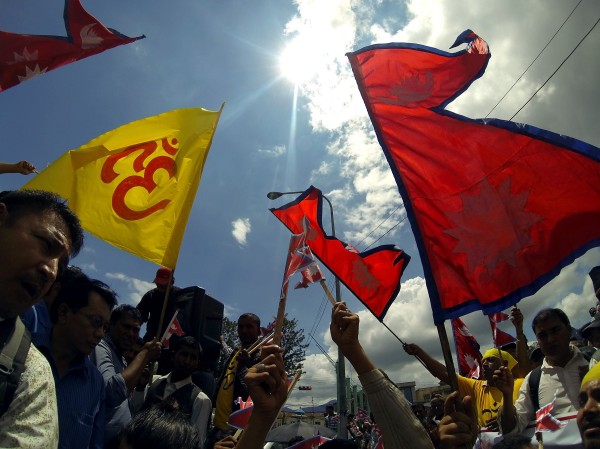 Y Shahi & A Chetri | Kathmandu & Pokhara | Aug 7, 2015:: As Nepal gears up to promulgate a new constitution, Hindu citizens have resorted to a devotional demonstration in front of the Constituent Assembly building at Naya Baneshwor with musical instruments, conchs and drums playing to demand reinstatement of Hinduism as Nepal’s state religion. A joint rally organized by different Hindu organizations on Monday (Aug 3) started from Maitighar Mandala and Gaushala simultaneously which headed towards the CA building with shout outs for Sanatan Vedic Hindu state with religious freedom.

At the programme, Nepali Congress Hindu Nation Campaign Coordinator Khum Bahadur Khadka said religious secularism and religious freedom were both similar in nature and argued that there were no alternative to embedding Hindu nation in the new constitution. “More than 90 per cent of the people have demanded Sanatan Hinduism as state religion during the feedback collection for the draft constitution,” Khadka said adding, “The demand must be fulfilled, if they cannot maintain Hindu nation then there should be a referendum.”

On the occasion, World Hindu Federation Vice Chairman Sanghita Shastri, Arjun Prasad Bastola, Joint Ancient Forum Coordinator Mitharam Bishwokarma and Brahman Society Acting Chair Rubayanath Koirala among others underscored the need for holding referendum in line with the democratic process to collect people’s advice if the parties cannot retain Hindu nation as per the people’s feedback. When the rally heading from Maitighar Mandala reached the Everest Hotel area in Naya Baneshwor a minor scuffle with the security forces ensued who barred the demonstrators from entering the prohibited zone.

The high wave of demanding Hindu Rashtra in Nepal has also been penetrated in the political arena Constituent Assembly too. On Sunday (Aug 2), Deputy Prime Minister and Minister for Home Affairs and also the member of Constituent Assembly, Bamdev Gautam has said that Hindu is Nepal’s national religion as over 80 per cent Nepalis are Hindu.

Inaugurating the Bol Bom Kanwar Yatra organised by Bol Bom Kawariya Association in Okhreni Secondary School at Sundarijal on Sunday, DPM Gautam said that no one can end Hinduism from this country.

“Who can end Hindu religion from Nepal as more than 80 per cent Nepalis are Hindu? Deceiving the people in the name of religion should not be done but religious reforms are needed,” Gautam said. 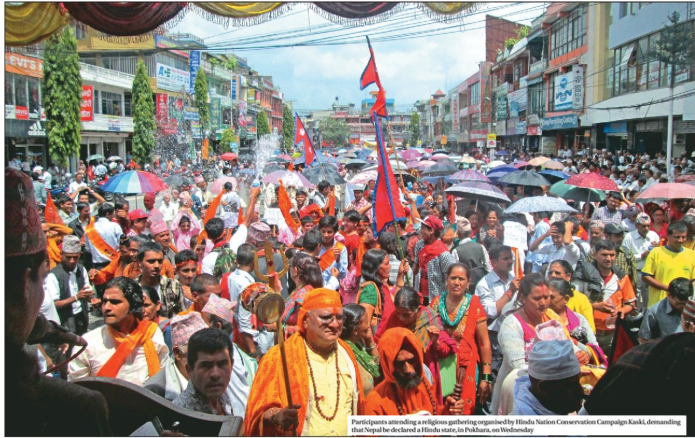