Use of plastic and paper national flags on Republic Day lead to their desecration. Hindu Janajagruti Samiti (HJS) has been undertaking a drive for past 12 years to prevent such desecration. Given below are some reports in this connection.

Representation submitted to police and administration at Raigad (Maharashtra)

Raigad – Representation was submitted to Shri. Sumant Bhange, District Collector and Shri. Pawan Chandak, Tehsildar at Panvel. Tehsildar ordered for issuing a press release in this context. Similar representation was submitted to police stations at Panvel, Kamothe and Khanda Colony as also in schools to create awareness amongst students on this issue.

Representation to Tehsildar at Barshi  (Maharashtra)

Barshi (Dist. Solapur) – Tehsildar Somavanshi was submitted a representation by HJS for preserving honour of national flags. Shri. Somavanshi said that HJS members had been submitting such representations and following up the matter for many years; therefore, this year, he had published news on this topic in newspapers even before receiving such representation from HJS. A committee would be set up on this issue and members of HJS would be invited for its meeting. Ms. Damayanti Rode, Ms. Malawade, Ms. Mahadevi Ingale and other activists were present on the occasion.

Satara (Maharashtra) – Tehsildar Vivek Salunkhe and PI P V Jadhav were given representations in the presence of HJS activists and Sanatan seekers.

Mahad (Dist. Raigad, Maharashtra) – Use of plastic and paper national flags lead to their desecration on Republic Day; therefore, to prevent such desecration, a representation was submitted by Hindu Janajagruti Samiti (HJS) to assistants of Tehsildar Sandip Kadam in his absence. Shri. Suresh Purohit of HJS, Sou. Archana Karve of Sanatan Sanstha, Shri. Ajay Mangade, a member of Jakhamata Navaratrotsava Committee were present on the occasion.

Similar representation was submitted to senior Police Inspector Dilip Shinde of city police station. He said, “Every year, you submit to us such representations; undertake drives; but it all goes waste. Your papers are also wasted. Instead, you should go to places where such plastic or paper national flags are manufactured and explain the subject to them.” (If everything is done by Hindutva-vadis, why do we need to spend so much money on maintaining departments like police and administration ? Despite holding power, if police are not going to take action against those abusing national flags and give sermons to Hindutva-vadis; how will these police, devoid of patriotism, be able to take care of people ? – Editor, Dainik Sanatan Prabhat) Sangli (Maharashtra) : Will spread awareness at all levels to stop the abuse of the national flag – Assurance from the Zilla Parishad HJS representatives and others while giving the memorandum
to Shri. Satish Lokhande, Chief Secretary of the Jilha Parishad (Right)

Sangli (Maharashtra) : Ms. Reshmakka Hortikar, President of Jilha Parishad and Chief Secretary, Shri. Lokhande assured of helping the ‘Respect the National Flag’ campaign initiated by Hindu Janajagruti Samiti. They promised to inform the headmasters of schools to create awareness regarding the National Flag, taking the issue to section heads of the education department, issuing press-notes, putting in efforts to stop the sale of plastic National flags. Shri. Lokhande also passed orders to the officers in the Education Department to take the printouts of all the documents from the Samiti immediately and to send them to each of the schools.

In order to ensure that the National Flag is not dishonoured on the 26th of January, HJS handed over a memorandum at the Jillha Parishad on 3rd January. After receiving the memorandum the president of the Jilha Parishad and the Chief Secretary gave a positive response gave the above assurances. The delegation comprised Shri. Mahesh Patil of Shri Kalleshwar Sevabhavi Sanstha, president, Shri. Deepak Shankar Patil, Shri. Sachin Pawar of Shri Shiv Pratishthan, gorakshak Shri. Ankush Godse and Shri. Dattatray Retharekar of HJS.

Such apathetic officers compel the public to agitate !

Vadodara (Gujarat) –  In order to stop the dishonor of the national flag on the upcoming republic Day, some activists of Hindu Janajagruti Samiti (HJS) recently visited Collector office to give a memorandum in the name of the Government. However, the additional District Collector Sudani brushed them away. With a view to stop the dishonor caused to the national flag, a campaign is being organised constitutionally on behalf of HJS since many years. As a result of this campaign, the use of plastic flags has been stopped. Therefore as a duty towards the nation Samiti activists had gone to give a representation to the District Collector; but since he was not available the activists tried to give the said representation to the additional District Collector Sudani. But Sudani told them that – “I am also a Hindu; but people must know that they have to honour the national Flag.”

Representation for including HJS in Government committee ! 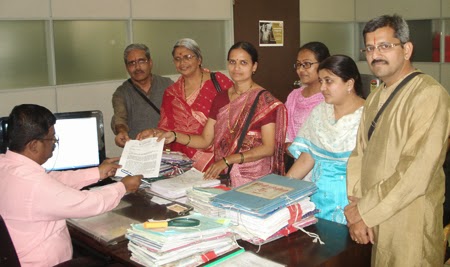 Pune : Hindu Janajagruti Samiti (HJS) has been working continuously for many years now for prevention of abuse of national flags taking place on the occasion of national festivals like 15th August and 26th January as people use paper and plastic flags and later throw them anywhere. HJS also filed public interest litigation (PIL) in Mumbai High Court to put a curb on such incidents which lead to insult of national flag. The Court, in response to this PIL, has given few instructions to the Government under which the District Collectors or Tehsildars have to set up a committee and create awareness in their respective districts towards prevention of abuse of national flags. HJS has been trying for many years to create such awareness towards maintaining honour of national flag and is desirous of helping the district administration in this matter as per Court’s orders. A representation was, therefore, submitted to the Dy. District Collector of Pune, Shri. Suresh Jadhav for including HJS, as a voluntary organization, in the committee to be set up for the purpose. Shri. Suresh Jadhav informed that no instruction was received from the Government in this context; but if such committee was to be set up, HJS would surely be made a part as it has been working sincerely for many years for the same goal. Shri. Pravin Naik, Shri. Niranjan Date, Sou. Anuradha Nikam, Dr. Kalyani Gondhalekar and advocate Sou. Prajakta Jamode etc. of HJS were present on the occasion.