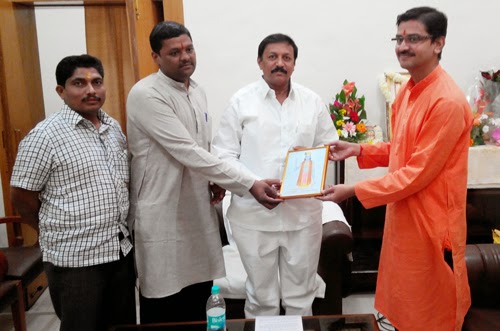 Shri. Deshmukh (third from left) being felicitated by HJS members

Nagpur (Maharashtra) : On 8th December 2014, a delegation of from Hindu Janajagtuti Samiti (HJS) comprising of Shri. Arvind Pansare, its (State spokesperson) and Shri. Sunil Ghanavat, the  (State Coordinator) called on Shri. Vijay kumar Deshmukh, the newly appointed State Minister (Labour) from Solapur and congratulated him on his appointment as Minister.

He said that he was aware of the activities undertaken by HJS. HJS delegation also met Shri. Vijay Shivatare, the State Minister (Water Conservation) when he too who lauded the selfless activities of HJS.