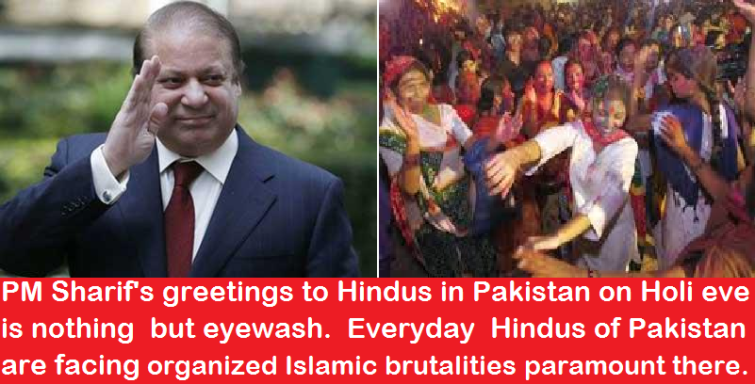 As a part of Islamic Taqiyya, PM Nawaz Sharif greets Hindus in Pakistan on Holi eve.

Prem Dalpat | HENB | Karachi | March 12, 2017:: While Hindus in Pakistan are being persecuted brutally by the Islamists on day alternative and number of Hindus are planning to leave Pakistan for saving their dignity and lives; Pak Prime Minister Nawaz Sharif on Sunday mocked the minority Hindu community members on the eve of Holi through Islamic Taqiyya by promising the safeguard of their equal rights.

In Islam there is no equal rights between Mumin and Kafir, Muslims and non-Muslims. Knowing it fully well PM Sharif deceived the minority Hindus in Pakistan by  saying there would be no discrimination on the basis of religion.

In his message, Sharif said Holi announces the advent of the spring season and change in weather conditions. But, Hindus face always a dark season in Pakistan.

Though he said the festival always gives a message of hope and better future and reflects changes in societies like changes in the season. But, Islam gives only a message of hatred and the future of world is endangered in the celebration of death of Jihad and ISIS like terrorist groups.

Quoting false assurance of Muhammad Ali Jinnah and the Culpable Constitution of Pakistan, Sharif said there would be no discrimination in Pakistan on the basis of religion. But, taking this shield of  Taqiyya in Islam,  no minorities in Pakistan are being protected Pakistan.

Upholding his secular face, PM Sharif said the entire nation acknowledges and commend the role of the Hindu community playing along with their Muslim countrymen and other people for the welfare and development of Pakistan.

Incidentally, Sharif acknowledged that people of Pakistan, including minorities, have suffered a lot at the hands of militants. But, in reality these militants are the products of Pakistani Army.

As per various report of Rights groups, the Hindu girls and women are the culpable victim of Islamic persecution in Pakistan.

Specially,  Hindu girls and women of Dalit minority community are worst victim of modern slavery through every persecution in Islamic Pakistan+.

Actually, Hindu women are put in an Islamic hell in Pakistan+.

According to South Asia Partnership-Pakistan, a local human rights group in Pakistan, Muslim men use to  take away and forcibly convert about thousand girls — mostly from Hindu community, almost each year.

Not only that, a large number of Pakistani Hindus leave for India every year to escape religious victimization, as Pakistan Hindu Council alleged.

Due to the Islamic persecution, Hindu population comes down to only 1.6 percent in present Pakistan which was about 16 percent around the partition time of  India-Pakistan in 1947.

Anyway, surpassing all the limits of lie, Sharif  said Islam is a religion of peace and killing of one innocent person as the murder of entire humanity. Actually, the world is seeing what is the reality of Islamic Peace. Islam is now synonymous with the hatred, militancy, blast, murder, rape and radicalism in highest level.

In reality, Nawaz Sharif’s greeting to  Hindus in Pakistan on Holi eve is posed a Taqiyya to defend Pakistan’s menace against humanity, peace and justice. These greeting has no value for Pakistani Hindus under Islamic brutality of Jihad.

Taqiyya is an Islamic way of deception an lying+ in any situation to defend Islam and its cause to hide any menace.