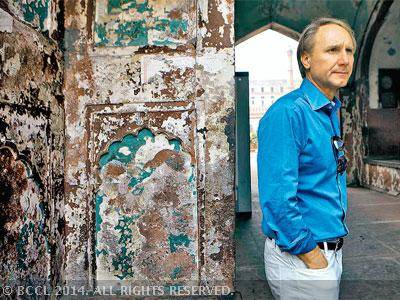 The Da Vinci Code (published in 2003), Dan Brown’s blockbuster thriller, was (and still is) subject to criticism and intellectual debate. It went on to become one of the top-selling novels of all time. In 2005, Time magazine’s editors, while naming him one of the 100 Most Influential People in the World, credited him with, amongst other things, “keeping the publishing industry afloat; renewing interest in Leonardo da Vinci and early Christian history; and spiking tourism to Paris and Rome”. Some of this Dan Brown magic was evident in Delhi earlier this week at the Penguin Annual Lecture 2014, where he received a rockstar’s welcome. In a freewheeling interview with Ishani Duttagupta, he spoke about everything from Bollywood to his fascination with Hinduism. Excerpts:

Your books weave in a lot of elements — history, religion, symbols, cryptology. Can they be classified as thriller fiction or have you created a new genre in popular fiction?

Dan Brown: I don’t really think about genre, I like to write books that I’d love to read myself. I like things that are fast paced, so I guess they are thrillers. I love to learn and at some level there’s something to learn from my books. And I love art and philosophy, so there’s something philosophical about my fiction. My readership is diverse — men and women, old people and kids, scientists and priests

Your books have Biblical plots and there’s a lot of history woven in. So what are the challenges in your research?

Your characters and plots question the world’s most powerful religion, and yet you have achieved phenomenal success…

Dan Brown: A lot of people have the same questions. It’s not magic — I’ve just said out loud what a lot of people are thinking. And it’s not just Christianity — all religions have aspects that are ancient and nonsensical, which modern people look at and scratch their heads over.

Would we see you exploring Hinduism in the same way at any point of time?

Dan Brown: I would love to, but at this point, I don’t know nearly enough about Indian culture. Robert Langdon [fictional character of Brown’s most successful novels and professor at Harvard University] is a specialist in Christianity, but all things are possible. It may take some time.

24-hour formats and literary treasure hunts have become part of your signature style; in India, did you find any such treasures during your short trip?

Dan Brown: We walked the spice market [at Chandni Chowk] which was an incredible experience — the colours, the people, the spices, and just the vibrancy of that area. We saw the Red Fort, which was beautiful and I had read a lot of the history; and the huge mosque Jama Masjid. We went to a Christian church service to get a flavour of that too. And I’ve been meeting so many of my fans in India, which is great. The enthusiasm of Indian people has always struck me.

You have described yourself as being on a constant spiritual journey through your novels; would you undertake such journeys outside Christianity?

Dan Brown: For instance, do you have any interest in exploring Hindu symbols with India as a background? I would love to. I’m fascinated by this part of the world — the warmth of people, richness of history and Hinduism which is the mother of so many religions. It has such a beautiful philosophy and way of life — I would love to write about it. I would need to know much, much more than I know and so I’m starting to learn.

You are currently working on your new book. When are we likely to be reading it?

Dan Brown: I’ve learnt not to predict — I’ve been researching and I will begin to write soon. We’ll see; it could be a few years.

Dan Brown: If I’m writing, I’m up at four in the morning at my desk, I work until 10 or 11 maybe, then take a break and have lunch. Then I get some exercise, play tennis or golf or work out — something physical. And then in the late afternoon I’ll do business — talk to publishers, or attorneys or movie people. And then I go out to dinner with my wife [Blythe Brown, painter and art historian] or she cooks or we have friends over; it’s a pretty normal life.

As a writer you have been read in 52 languages by people all around the world — do you feel a sense of empowerment? Is it important for you to be a global influencer as a writer of popular fiction?

52 languages, over 200 million copies sold, and very often among the highest earning authors annually — what do such figures mean to you?

Dan Brown: It may sound strange but I don’t think about it very much. I’m not someone who is motivated by money, if I was, I would not be writing any more — I would be racing yachts or doing whatever rich people do. But my wife and I, when we think of our passions, we don’t think of fast cars or jewellery or things like that. We’ve built a home, which is a work of art and architecture, which we designed. We wanted it to be our one luxury — of building a piece of art and living in it. That’s our home in New England near Boston; it’s built with symbols in its architecture and has secret passageways. Building it was fun.

You have spoken about how science and religion have shaped your books. How important do you think it is for fiction writers to combine these two elements in their writing; can such boundaries sometimes stymie a fiction writer?

Dan Brown: I agree it is possible. However, science gives us all sorts of new tools to explore the world and in some ways make us even more creative. It shows us how to use technology. Also, research scientists need to be creative people — yes they are working in a concrete world with facts, but they need to constantly think outside the box and that’s how technology and science progress.

Do you see yourself as a non-fiction writer in future?

Dan Brown: Perhaps. I don’t have an idea at this point. But what I try to do in my books is share ideas that you might find in dry non-fiction works, in an exciting way. The reader is having fun. But when you close the book, you’ve learnt a little about Dante or Florence or overpopulation or about genetic engineering.

Do you see anything of yourself in your protagonist Robert Langdon?

Dan Brown: He’s the man I would like to be — he shares my interests in art, history and codes. But he is significantly more daring and has a more exciting life.

Is Amazon good or bad for publishing?

Dan Brown: eBooks are here to stay, as are low-cost, physical books. On the good side, eBooks connect writers and readers and, on the not-so-good-side, they devalue content by pricing it so low. I’m confident that all of this will work out. Publishers and Amazon rely on each other and they’re going to find a way to make it all work. I don’t think about it much because I’m a creative person. I just write my books and hand it over to the publisher for them to work it out. I don’t have a strong opinion on this but hope there will be a symbiosis in some way.

Not everyone is happy that Tom Hanks plays Langdon. Your thoughts?

Dan Brown: Tom Hanks is fantastic as Langdon — he is highly intelligent, very intellectually curious and has a great sense of humour, which Langdon has too. He is one of the great living American actors. I feel honoured that he is Langdon.

In future, do you see any other actor in that role?

Dan Brown: I haven’t thought that far ahead — Langdon’s not getting any older but the rest of us are unfortunately. Meanwhile, my novel Digital Fortress is being made into an TV show in America. But perhaps, we could do a musical Bollywood version of The Da Vinci Code and have an Indian actor play Langdon!