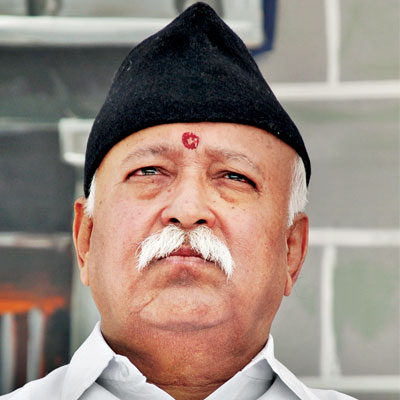 The Bharatiya Janata Party (BJP), according to all indications, is set to form the next government at the Centre with its leader Narendra Modi as the prime minister. If there is one person who masterminded the grand strategy to propel the BJP to power, it is the “sarsangchalak” of the Rashtriya Swayamsevak Sangh (RSS), Mohan Bhagwat (64).

Sunil Deodhar, a senior RSS leader, said: “There is no doubt that Bhagwatji played an extremelycrucial role in propelling the BJP and Modi forward. Bhagwatji sensed early in the day that there was a powerful undercurrent within the RSS and the BJP in favour of Modi. From then onwards, he got down to frame a systematic strategy to take the BJP forward with Modi at the head of thecampaign. His genius lies in feeling the pulse of the rank and file, and the people at large. When there were certain hiccups like the one relating to LK Advani (who initially opposed the appointment of Modi as the campaign committee chief), it was Bhagwatji who sorted out matters to make the going smooth for Modi.”

Senior BJP ideologue and national executive member Vinay Sahasrabudhe also acknowledged the “strategic vision” of Bhagwat. He saw a parallel between the roles played by the late RSS “sarsangchalak” Balasaheb Deoras in placing the BJP on the trajectory to success in 1996 and in Bhagwat doing a similar feat in 2014. In 1984, the BJP’s strength in the Lok Sabha was reduced to a pathetic figure of two seats. In the wake of the sympathy wave generated by the assassination of Indira Gandhi, the Congress, under the leadership of Rajiv Gandhi, was swept to power. Deoras, who was known for his sharp intellect, then fine-tuned a complex strategy to launch the BJP on the path to power. It was his idea, along with that of another RSS leader Moropant Pingle, to launch the Ramjanambhoomi movement, which yielded rich political dividends to the BJP. In May 1996, the first BJP government under the leadership of Atal Bihari Vajpayee was formed. The government lasted only 13 days, but was voted back to power with a bigger majority. Deoras, meanwhile, breathed his last in June 1996, but he had demonstrated the RSS’ ability to be the launch pad for the BJP.

Another senior RSS activist, Girish Deshpande, noted that it was Mohan Bhagwat’s father Madhukarrao who recruited Modi and made him a “pracharak”, or full-time volunteer. Madhukarrao, who was then the “pranth pracharak” in charge of Gujarat, had apparently recognised the potential in Modi quite early. Two other senior RSS leaders, Laxmanrao Inamdar, who was also in charge of Gujarat subsequently, and his brother Tatyarao Inamdar, who had played a critical role in spreading the RSS network in Gujarat, laid the basis for the emergence of the BJP. As a “pracharak”, Modi received intense guidance from all these leaders, both at organisational and ideological levels.

Deshpande also noted that Bhagwat had never diluted the core ideology of the RSS. When the courtverdict was delivered in the Ramjanambhoomi case, Bhagwat, for example, reiterated that the wishes of the Hindus on the issue should be respected because it was an article of faith. Sources in the RSS said the temple at Ayodhya was very much on the agenda of the organisation.

Ratan Sarda, a senior RSS leader, said: “Bhagwat smoothly executed the generational change in the RSS which was initiated by his predecessor KS Sudarshan, and in this election, he got RSS cadres to mobilise voters in a big way.”

Deshpande said Bhagwat had carefully ensured that the average age of an RSS “swayamsevak” was reduced from the earlier 65 years to 50 years. The decision to induct IT professionals and use thesocial media was Bhagwat’s.

Deodhar noted that Bhagwat’s grip over the RSS was tremendous and the “swayamsevaks” were ever ready to translate his vision into action. If on Friday the BJP and its allies indeed secure a majority with Modi at the helm, a lion’s share of the credit will go to Bhagwat, who started life as an ordinary RSS volunteer in one of Maharashtra’s most backward districts of Chandrapur.