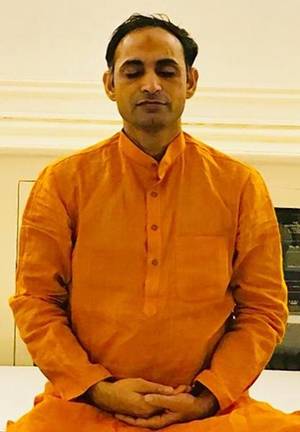 Mokshraj, one of the three Yoga and Culture Acharyas.

WASHINGTON DC, March 11, 2018 (The Hindu): In a new initiative by the Narendra Modi government, a band of Indian officials posted to three missions in the U.S. now promote Indian culture as part of diplomacy. Designated as a Yoga and Indian Culture Acharya, the three officials in Washington DC, New York and Chicago are experts in Sanskrit, yoga and Hindu scriptures. They were selected by the Indian Council for Cultural Relations through a special recruitment process and have diplomatic passports and offices in Indian missions. Their appointment is initially for two years, extendable by two more. And all three have the mandate to travel around the country and organise events that promote Indian culture.

These Acharyas feel that yoga is being commercialized and, in the process, its spiritual dimension gets lost. They say the Indian government, through this initiative, seeks to to teach yoga in its entirety. “Yoga is about using all that you have — body is only part of it — for union with the God. Asanas, the exercise part of it spread fast… but yogvidya is about the person’s physical, spiritual, intellectual, social, psychological, and economic progress… We have to spread these values. That is our sacred mission,” says Ms. Prerna Arya, who serves as the Indian consulate in Chicago.