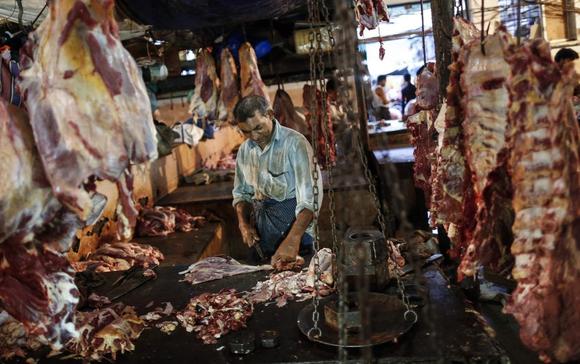 India’s main Hindu nationalist party says it plans to clamp down on beef exports if it takes power after general elections that end on Monday, threatening supplies from one of the world’s biggest shippers of the meat.

Surprisingly in a country where so many view cows as sacred, India has been poised to become the No.1 beef exporting nation, supplying markets such as Malaysia, Thailand, Vietnam and Egypt.

Although most of that is from buffalo, which are not worshipped by Hindus, the Bharatiya Janata Party (BJP) wants to curb exports that jar with the country’s vegetarian tradition and to bolster the availability of animals reared to work on farms and for their milk.

A drop in Indian exports could buoy global cattle prices that have come off record peaks this year after the U.S. herd was pegged at its lowest in over six decades.

“If elected, we will crack down on beef exports and we will also review the subsidy the government gives for beef or buffalo meat exports,” Satpal Malik, the BJP vice-president who drafted the farm policy section of its election manifesto, told Reuters.

To help beef producers and exporters set up abattoirs, the federal government pays 50-75 percent of the cost of construction.

The BJP manifesto defines the “cow and its progeny” as integral to India’s cultural heritage – appealing to the party’s core constituency of Hindus who abhor eating beef.

The party has also said it would outlaw cow slaughter in the only two states where it is currently permitted, and wants to stamp out illegal abattoirs where meat from cows enters the supply chain.

Voting in the country’s mammoth five-week general election has nearly finished, with polls showing the BJP taking the most seats and the ruling Congress Party likely to be ousted after a decade in power. Results are due May 16.

The possibility of a government drive to reduce exports has spooked beef suppliers at India’s largest abattoir, which slaughters 300-500 cattle a day in Deonar on the outskirts of Mumbai.

“We have voted for Congress but if the BJP comes to power, we will have to be cautious. They are against our trade and they may come with strict rules,” said supplier Mohammad Shareef Qureshi, sitting on an iron cot in a Deonar tea stall.

Beef production is dominated by Muslims, a minority in the country, and can stir sectarian divisions.

Clashes and altercations between some voluntary groups affiliated with the BJP and people involved in beef production and exports are common.

“The situation would get worse for us under a BJP government,” said one truck driver who transports livestock. Giving his first name as Guddu, he complained of harassment by some Hindu organizations while on the road.

“We do oppose cow slaughter and we do act against it … Why should it be allowed when cow is sacred to millions of Hindus?” said Prakash Sharma, spokesman for one leading Hindu organization.

The next government must ban beef exports, added Sharma, whose group, the Vishva Hindu Parishad, or World Hindu Council, is part of an umbrella group of Hindu nationalist organizations that includes the BJP.

Hindu-Muslim relations have been a key election issue, with critics accusing BJP prime ministerial candidate Narendra Modi of not doing enough to protect Muslims in a spasm of religious violence in the western state of Gujarat in 2002 that left at least 1,000 dead.

Modi, chief minister of Gujarat, has denied any wrongdoing and a Supreme Court inquiry found no case to answer.

Some in the industry said that a BJP victory would only have a limited impact on exports, however. Government figures show these increased to $3.2 billion in 2012/13 from $1.9 billion in 2010/11, boosted by robust demand for cheap, lean Indian halal meat.

India trails only Brazil in beef exports, with a 20 percent market share, according to U.S. Department of Agriculture figures.

“Any major restrictions on exports are unlikely because meat exports are a big source of earning for the government,” said Salim Qureshi, a top supplier of buffalo in the northern town of Aligarh.