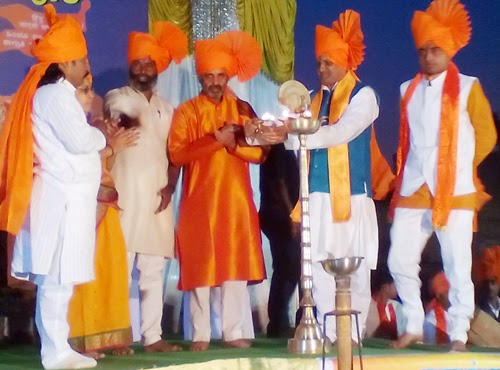 Khanapur-Belgavi (Karnataka) : Every year 20,00,000 Hindus are converted but those who kept quiet on such conversions all these years, are making noise today about purification process of non-Hindus. We need to impose financial boycott to eliminate such mentality.

One month back, local illegal slaughter-house was closed down but it has been re-opened now. If it is not closed down within 2 days, intense agitation will be staged, was the warning given by Shri. Pramod Mutalik, the founder-President of Sriram Sena during Hindu Dharmajagruti Sabha (sabha) held by Sriram Sena on 22nd December on Deshpande ground.

The sabha was attended by 5000 devout Hindus.

3. Shri. Milind Ekbote, the President, Samasta Hindu Aghadi : I declare that Khanapur’s name has been changed to Srirampur from today.