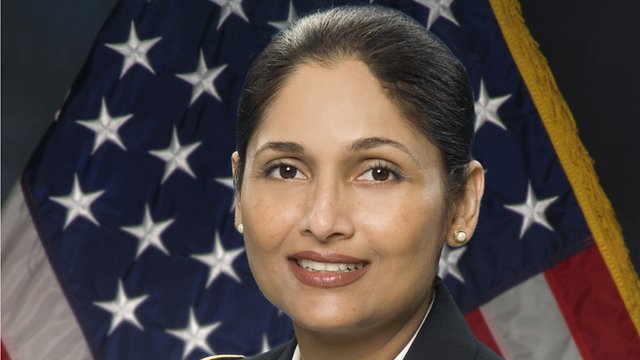 Chief guest at Divali Nagar 2013, US Army Captain Pratima Dharm told the large audience at Thursday’s opening night, one must strive to always be in God’s company.

TRINIDAD/TOBAGO, October 26, 2013 (Newsday): Chief guest at Divali Nagar 2013, US Army Captain Pratima Dharm told the large audience at Thursday’s opening night, one must strive to always be in God’s company. Everyday when I wake up at 4 am, I say to Lord Krishna, ‘I am yours and you are mine,’ ” she said at the Divali Nagar site, Charlieville, Chaguanas.

Dharm, the first-ever Hindu chaplain in the US Defense Department, said while serving in the US Army she went to war in Iraq and her plane was shot at, but she kept Lord Krishna in her mind and knew He was in control, keeping her safe.

She urged the public to read the Bhagwad Gita, that is in English especially Chapter 11 verse 11, where Lord Krishna revealed his original self as the lord of the world to the soldier Arjuna.

“The Lord reveals himself to us when it is necessary. He steals into our moment and can change our course,” she said. She emphasized Arjuna had many questions about the path of war and the reason for fighting the enemy and the answers were given to him by Lord Krishna. These answers she says, are there to be read and understood. Lord Krishna is regarded as the embodiment of love and divine joy, one who destroys all pain and sin. He is a protector and an instigator of all forms of knowledge.

Dharm praised the people of TT for their kindness, saying this is her first visit and she is most happy to be here. She is also a guest of Swami Prakashananda of the Chinmaya Mission as she is associated with the US chapter of the mission.