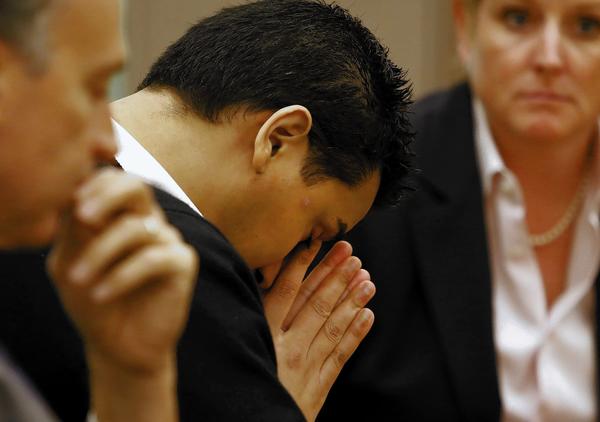 Iftekhar Murtaza bows his head before an Orange county jury recommended that he receive the death penalty for killing the father and sister of his former girlfriend. (Don Bartletti, Los Angeles Times / December 16, 2013)

A jilted boyfriend who killed his former girlfriend’s father and sister, burned their Anaheim Hills mansion and then set their bodies on fire should be put to death, an Orange County jury recommended Monday.

Iftekhar Murtaza quietly shook his head as jurors announced that he should get the ultimate punishment in the 2007 crime, which came after his then-girlfriend told him her parents disapproved because they were devout Hindus and he was Muslim.

“I would like to take a lie detector test,” Murtaza blurted out to those who remained in the courtroom after jurors had filed out. “Anybody that’s interested.”

Murtaza was convicted in November of killing his ex-girlfriend’s father, Jayprakash Dhanak, 56, and sister, Karishma Dhanak, 20. Their burned bodies, doused in gasoline, were later found in a secluded area near UC Irvine.

The ex-girlfriend’s mother was found critically wounded on a neighbor’s lawn. Leela Dhanak was in a coma for weeks, but survived the attack and testified during the murder trial.

Murtaza took the witness stand in his own defense, offering a sometimes rambling version of how the crime unfolded. He blamed others for the killings, at one point even pointing the finger at the son of singer Bobby Brown, whose name had never surfaced in the case.

“He should’ve listened to his lawyers. He shot himself in the foot,” said a juror, who identified himself only as Juror No. 12. “He thought he was smarter than everybody else, but his story had a lot of holes.”

Leela Dhanak said it had been difficult to sit through the trial and testify because it made her relive the attack. Her daughter, who testified about her breakup with Murtaza, is now attending law school and was not in court Monday.

“I’m grateful justice has been done,” the mother said outside the courtroom. “I want to move on with my life.”

The revenge killings, authorities said, were driven by Murtaza’s attempt to win back his former girlfriend, Shayona Dhanak, who testified that she decided to break up with him because he was overly possessive.

Murtaza reacted to the breakup by concocting a plan to kill the family, even trying to hire Russian hit men to pull off the job, hoping that in the tragedy his former girlfriend would turn to him for comfort. He ended up carrying out the murders with a friend, who was previously convicted in a separate trial.

A portion of their planning was conducted on AOL Instant Messenger, which the prosecution presented to jurors.

The autopsy showed that Jayprakash Dhanak had been stabbed 29 times but died as a result of a crushing injury to the back of his skull. Karishma Dhanak had a large gash on her throat and bled to death, evidence showed.

Shayona Dhanak was the only family member not at home during the attack.

Murtaza’s attorney, Doug Myers, said it would be unlikely for the judge to set aside the jury’s recommendation. He said as far as he knew, no judge in Orange County has every modified a jury’s death penalty recommendation.

Murtaza’s brother, Smishtiak, maintained his brother’s innocence outside the courtroom, saying he was unfairly misrepresented and mischaracterized.

“My brother is not capable of doing this kind of thing,” Smishtiak Murtaza said.

Murtaza will be formally sentenced Jan. 10.