AMC plans to treat sewage water running below the historic structure along with landscape development. 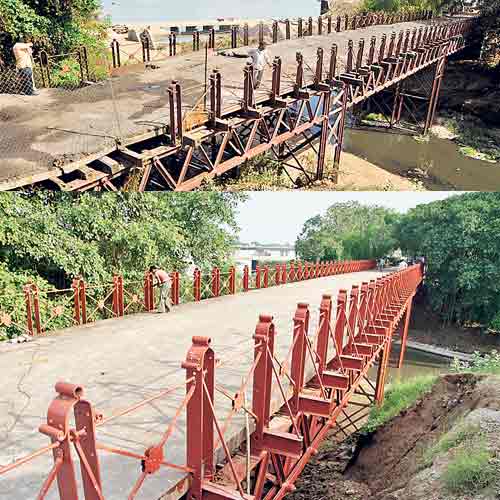 After restoration of the bridge, the AMC is now planning to treat the sewage water and develop a huge garden in the adjoining area. The civic body’s ambitious project of making tertiary treatment of sewage water and release it in the Sabarmati would also be applicable for water flowing below Dandi

“We are planning to install a tertiary treatment plant of 60 million litres per day (MLD) capacity near the bridge. The treated water will be used for gardening,” said an official of the AMC’s water and drainage department.

At the moment, more than 100 MLD water flows below the bridge which comes from areas like Chandkheda, Ranip, Kali and Sabarmati. To stop the flow of sewage water, the civic body has planned to install two pumping stations at Chenpur and Ranip — the construction of which would be completed in the next two years.

“Initially, it was only about the restoration of the bridge. However, in the process, we have realised that to attract visitors, landscape development was also necessary.

The plan has been divided into three phases — restoration of the bridge (which is complete), landscape development (about to begin) and development of the area where the slums would be removed to accommodate activities,” said municipal commissioner Guruprasad Mohapatra, adding that the whole idea was to develop the area near the bridge where people can go, sit and enjoy the activities there.

People removed from the slums would be given accommodation in quarters constructed for the economically weaker sections (EWS). The construction of pumping stations would cost Rs250 crore while the tertiary treatment plant would be built with funds from the Jawaharlal Nehru National Urban Renewal Mission (JNNURM).