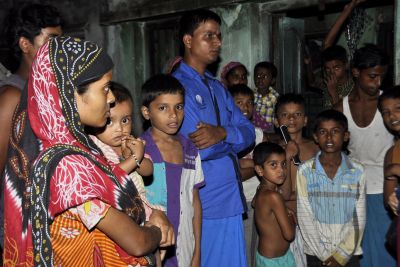 “When she was brought home, we saw death in her eyes”

“Since no assistance, financial or otherwise, has come from the state government, we are planning to appeal to the Centre to take notice of our plight”

“Who can carry our message but you, the media”

Those who claim the Maheshtala gangrape case is only a road accident, are unable to answer why four people were arrested and a gangrape case was registered. Indrani Roy and Dipak Chakraborty report after speaking to family members of the victim.

‘Drive away any reporter that visits your place, beat them up if need be’

‘Don’t you dare speak to any media about the incident.’

“‘Throw them out and beat them up if need be,’ a police officer told us yesterday,” the Maheshtala rape victim’s brother informed us when we visited their home on Wednesday, a week after the incident.

He couldn’t recollect the officer’s name though.

A 27-year-old homemaker, mother of two, was allegedly raped by five men on July 31 at Maheshtala on the south western fringe of Kolkata.

As the survivor was still dealing with her injuries and a devastated mind in the hospital, her two little boys sat in a corner, oblivious of events unfolding around them.

“The officer also tore off a poster that the APDR (Association for Protection of Democratic Rights) had pasted on our wall and took away the tattered salwar which she was wearing that evening,” said the survivor’s brother.

“Why are you speaking to us then?” we asked.

“Who can carry our message but you, the media,” he replied.

“We have lost faith in the administration.”

According to statements given to doctors and the police, the survivor had stepped out of her home that evening to get pani puri for her toddlers.

On her way, she met her friend Mohammed Shafiq alias Raj.

The two chatted for some time and then planned a short drive around the area. The woman returned home, fed her kids and waited for Raj. Around 7 pm, the Raj arrived in a Tata Magicvehicle along with four other men. She refused to get into the car seeing the other men, but Raj managed to convince her.

The victim said she was offered a soft drink and after a while she fell unconscious. She woke up to find herself being raped by the vehicle’s driver at a deserted place. Though she regained consciousness, she was too weak to raise an alarm.

She was in great pain and bleeding profusely. She could make out that she had been raped repeatedly by Raj and his companions.

Around 11 pm, the men carried her into the same car and threw her off on the road adjacent to the Akra railway station, a few kilometres from her home before speeding away.

She lay there alone — her senses numbed by pain.

‘I was left with no strength to draw the attention of people,’ the woman had told the police.

However, one of the passersby recognised her, shouted for help and took her home.

“When she was brought home, we saw death in her eyes,” the victim’s sister told Rediff.com.

“Her salwar was tattered and she could barely speak. All that she could utter were a few groans,” the sister-in-law said.

When the victim’s mother took her to Maheshtala police station around midnight, they were asked to go to the Budge Budge ESI Hospital.

Strangely, the police neither registered a complaint, nor sent any lady constable with the victim to the hospital, as is required by law.

From ESI Hospital, they were referred to Vidyasagar Hospital in Behala.

However, it took the police 72 hours to initiate a gangrape case, and only after the local media reported the incident.

The mastermind Raj, however, is absconding. Those arrested have been remanded in police custody till August 8.

“We have initiated a gangrape case,” A Ravindran, additional superintendent of police (West), had told Rediff.com over phone last weekend.

Poverty and municipal negligence were written all over the alleys that led to the victim’s shanty. With 4 or 5 meat shops bordering the lanes, the stench was unbearable.

Finding the victim’s home wasn’t tough and soon a small crowd gathered around us, leading us to our destination.

Her home was a 100-square foot area built of an unkempt combination of cement, mud and tin, an accommodation for a family of ten.

“Earlier there were seven of us. Ever since my sister’s husband deserted her, she has been staying here with her two sons,” the victim’s brother said.

“We earn between Rs 8,000 and 10,000 approximately per month and rice with a pinch of salt is what we can afford most days of the month,” said the brother. “In case there is a windfall (an extra Rs 1,000 or more), we buy fish or meat, whichever is cheaper,” he added.

Most of the family members, including the school dropouts, work as tailors. They supply to cloth merchants in and around the area.

“My sister is very good at her work, but…,” his voice choked.

“Since no assistance, financial or otherwise, has come from the state government, we are planning to appeal to the Centre to take notice of our plight,” the brother said.

Significantly, neither the local councillor, nor the member of the legislative assembly, both belonging to the Trinamool Congress, has visited the victim so far.

The state government has decided to be in a state of denial.

Prominent people, who have been to the survivor’s Maheshtala home so far, include Congress leader Somen Mitra, painter and social activist Samir Aich, a few Bharatiya Janata Party members and the APDR team.

“There was no rape, it was a lovers’ tiff,” MLA Kasturi Das told Rediff.com over phone from Asansol.

“You ask Vidyasagar Hospital Superintendent Dr Uttam Majumdar about the incident and he would explain that the case was registered as a simple road traffic accident.”

But why did the police arrest four people? And why did they register a gangrape case? Das apparently had no clue.

“Ask painter Samir Aich. He visited the hospital,” she said.

“There was no rape, trust me. Please don’t exaggerate and misreport,” she barked before hanging up.

The Vidyasagar Hospital too sang the same tune when Rediff.com contacted its authorities.

Hospital superintendent Dr Majumdar was not available for comment but one of his subordinates said, “There was no rape, we are informed.”

But what about the preliminary reports and the police case?

Police officers at Maheshtala police station too refused to speak on the issue and the special SP was unavailable.

He visited the Vidyasagar Hospital a couple of days’ ago and had spoken to her mother.

“It’s disturbing that no one from the state government had an interaction with her,” Aich said.

“The state government and its police are now trying to cook up a road accident case. It’s a jungle raj we are living in. One more rape, one more to be swept under the carpet,” he said, adding, “As a resident of Bengal, my head hangs in shame.”

“The state government and its police are now desperate to cook up a cock and bull story,” Congress leader Somen Mitra said.

“The accused who is absconding will never be traced and those who are held will be released soon,” he said.

Bharatiya Janata Party leader Tathagata Roy is neither surprised by the rape nor by the state government’s apathy.

“We all remember what a TMC member of Parliament (read Tapas Pal) said recently. Theirs (TMC) is a party that encourages rape.

“What more do you expect?”

Roy said he would speak to the BJP central leadership about the incident and would try his best to get some relief for the victim’s family.

“Didi, our workforce is now two-people short — she as well as my mother-in-law who is attending to her,” the victim’s sister-in-law told this reporter.

“Durga Puja is just a month away.

“How do we make both ends meet?

“Could you do us a favour? Could you please convey our appeal to the powers that be?

“Don’t we deserve some assistance? Is there anything the central government can do?”