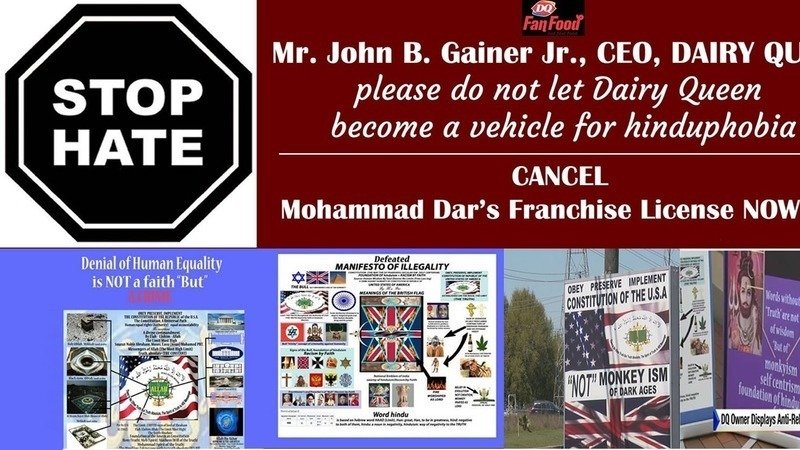 We the undersigned are writing this petition with a request to bring your attention to rather ugly and untowardly posters messages denigrating and insulting Hindu beliefs put up at a Dairy Queen in Kemah, Texas.

As proud immigrants to the USA we are all aware of the iconic brand of Dairy Queen which serves as a neighbourhood ice-cream parlour and eatery. Thousands of practising Hindus visit DQ every day when they want to treat their children for a cup of ice-cream or want to spend some family time together. But recently this pleasant and family friendly image of DQ took a hit due to sad turn of events. When a DQ owner in the town of Kemah, TX Mr.Mohammad Dar, a Muslim U.S citizen of Pakistani origin started displaying absolutely reprehensible sign posts and messages on his DQ business property.

On the message board which says “Obey, preserve the constitution of the USA, not Monkeyism of the Dark Ages”. The Monkeyism being a specific reference to Hinduism as it is clear from various press reports and interviews the Mr.Dar has unapologetically given out. His views about Hinduism as he told mySA.com “Hindus don’t follow any limit or law, they follow desires like an animal – that is the foundation of Hinduism,Monkeys don’t plan anything, they just do what they desire, but humans follow the limit and law”. These messages are totally misplaced, the foulest possible lies and a malicious attempt at smearing insult on Hindus and their belief system.It portrays Hindus and their beliefs in a false light and makes an attempt at spreading propaganda aimed at demeaning Hindus, which we as practising Hindus of Greater Houston area find very disturbing. All this was done on a property which was under the DQ umbrella. We find that act condemnable and request DQ to take down the offensive posters at once without the slightest delay.

There are almost a BILLION human beings in the world who identify with the Hindu set of beliefs. Hindus are a diverse set of people with an equally diverse of schools of thoughts, beliefs and tenets by which they lead their lives. Hindus have been peaceful and have contributed to this great country with their hard work, intelligence and innovation. A very superficial look at CEO’S  of two of the world’s biggest companies Google and Microsoft would attest to the fact what practising Hindus are. We are pretty sure that DQ also employs a number of people who believe in Hindu beliefs or Hinduism. Every Hindu who comes to US or anywhere in the world for that matter of fact will abide by the constitution of that country and laws of the land.

In such circumstances if hate-mongering, pathetic lies are allowed to be peddled on a DQ property. We Hindus feel it would be a very sad commentary on DQ’s business standards, practises and above all Ethics. We would like to assure you that we stand by the Freedom of Expression and Speech as granted by the Constitution of the United States, but WILL NOT however stand and watch our religion being lied about.

The first reports of these messages surfaced in the electronic media on March 22nd,2016 and since then we have seen comments of moral ascendancy from DQ about the sign post and messages, but nothing concrete in terms of action. There is also news that the Owner would be selling his business or moving out of it on March 31st,2016. The sign posts and messages being removed at that point would be of no consolation to Hindus, since that would be a direct implication to the callousness of DQ and its franchise owners to the requests of Hindus. Thus we respectfully submit this petition that the hate mongering and simply false signs and messages be taken down from the DQ in Kemah, TX. We condemn the actions of Mr.Mohammad Dar in the strongest possible terms and would like to ask DQ to swiftly act against him and his outlet using the proud DQ symbol.

This petition will be delivered to:
Read the letter

Hindu Mahasabha of America (Hindu Congress of America) started this petition with a single signature, and now has 398 supporters. Start a petition today to change something you care about.