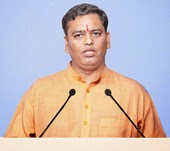 Margao (Goa) : Shri. Ramesh Shinde, ational spokesperson of Hindu Janajagruti Samiti (HJS) gave guidance to devout Hindu employees of a pharmaceutical company located in an industrial estate; on the topics of spiritual practice, protection of nation and Dharma. The program was attended by 20 devout Hindus. Shri. Ramesh Shinde said, “Hindus should increase their faith and devotion in God. God always comes to help His devotees. We should therefore, totally surrender to Him and increase prayers.

Draupadi remembered Srikrushna with intense yearning and He protected her. Muslims read ‘namaz’ 5 times in a day; Christians also pray to God as advised in their religion; but Hindus do not abide by Dharma. Hindus need to abide by Dharma; increase their love and respect towards Dharma. When we surrender to God, He does help. It is a period of crisis for Hindus. Film heroes have become ideals of people. Media always publishes news against Hindus and Hindus are paying heavily for lack of ‘Dharmabhiman’ in them. During period of Ramzan, Hindus are forced to shut down their shops in Kerala and Hindus do not oppose. We should create awareness amongst Hindus as it is the spiritual practice of present time.”