If Ramakant Keshav Desphande, founder of the RSS-affiliatedAdivasi Kalyan Ashram, were alive, would he be proud of this achievement? Nearly 10 years after he passed away, his photograph hangs just above the god’s idol in a thatched-roof temple in New Chingsa village, from where it looks upon the devotees. In row with Desphande’s photograph are paintings of Swami Vivekanda and Buddha. It’s quite a feat considering that New Chingsa is a village of 80-odd Tangsa tribal families in Changlang district, Arunachal Pradesh, bordering Myanmar. It is all the more incredible because Tangsa people have traditionally been animists, with their supreme spirit, the Rangfraa, not bound to temples, idols or any form.
On a Sunday morning, the atmosphere in the temple in the New Chingsa is frenetic. “Jai Rangfraa, Jai Rangfraa, Jai Rangfraa.” The devotees’ incantations pick up a feverish pace as the half a dozen priests standing near the idol slip into a trance, shaking and shivering. The Rangfraa idol looks like a Mongoloid white Shiva. This Shiva-like Rangfraa is a creation of the RSS affiliates who have converted the animist belief system of Tangsa in to a sect of Hinduism and Rangfraa into a clone of Shiva.

(Photo Gallery: RSS on its mission to turn tribals in to Hindus)

The Tangsa, migrants from the Indo-Tibetan plateau, number about 21,000 today and are classified as “other Naga tribes”. Initially animists, many of them converted to Christianity with the advent of missionaries – mostly Baptists. The rest remained true to the animist Rangfraa beliefs.

The RSS affiliates, famous for converting tribals to Hinduism in central India, are having a field daynow in Arunachal just as the missionaries had earlier. And, it’s a relatively discreet effort. The Rangfraa cult is not their first project. Donyi Polo, a syncretic new religion, has already spread through the Abotani central belt of the state and Intayism similarly has been established in the Idu Mishmi tribe. Shivling keep propping up across the state, marking new territory for the project.

In the late 1990s, the RSS worked with some Tangsa leaders, including L Khimun, an engineer, to hold a painting competition at Changlang. Khimun says he and others were working to set up a society for reforms but realised it needed a religious tenor. Then he met the RSS. The painting competition was held to give a form to the god, Rangfraa. “More than 100 people participated. The winning painting just happened to look like Shiva with some traditional imagery. The painting was sent to Jodhpur. From there came the first 300-kg marble sculpture of the Rangfraa in 1997,” tells the soft-spoken Khimun, now the secretary-general of the Rangfraa Faith Promotion Society. The RSS affiliates paid part of the cost of the making and transporting of the idol.

Khimun has written several holy books codifying the religion. They seem to pick ideas and moral lessons from all over but affirm that Rangfraaism is a part of the Hindu fold. Of the role of RSS and its sister organisations, he says, “They are always with us to guide and help. They provide training and resources. People from Nagpur come here at times.” 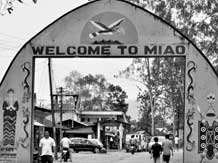 “We have made a key contribution to the movement,” says Kampa Taisam, the Miao block president of the Arunachal Vikas Parishad, a RSS organisation. “We distribute medicines, hold medical camps and other activities and contribute to the cost of building temples.” He is also proud of his meeting RSS head Mohan Bhagwat in Nagpur.

The cult or religion now has about 1,000 members from the Tangsa, Tutsa and Nocte communities spread across Tirap and Changlang districts. That is still only two to three per cent of the total population of the three tribes put together. Many villages have Rangfraa temples now and village-level convenors.

For the RSS, looking to convert tribals to Hinduism, Arunachal Pradesh has been a ripe fruit to pick. About 20 main tribes, with hundreds of sub-tribes, are spread sparsely over difficult terrain. In towns, the relatively better off, still bound to traditional filial structures, have modern aspirations and seek to create a unique identity that gels with the rest of India. In villages, the poorer survive abysmal infrastructure in a state of near disconnect from the world outside. There is a strong sense of alienation but it largely does not boil down to secessionist desires. Many students from the state have passed through Vivekananda Kendra schools, imbibing the basic tenets of Hinduism and learning Hindi, which is spoken along with Assamese between tribes.

“They provide basic health facilities and education. The missionaries do the same. The state is all but absent when it comes to providing the basics. They come and fill the void,” says a young Tangsa leader.

The anti-Christian subtext remains strong in the new Rangfraa religion, which conflates Hinduism with nationalism. There has been violence on occasions in the state between Christian tribals and the revivalist groups.

“As per our definition, all those who are willing to die and live for Hindustan are Hindu. Those who are anti-Hindu or anti-national, they criticise Rangfraaites. Especially the Christians, I shall say openly,” says Khimun. His holy books speak of the need to reconvert proselytised Christians. Khimung says about 100 Christian tribals have converted to Rangfraa so far. But the Rangfraa project has not yielded an exact replica of the Gangetic-belt Hinduism. The tribals of Arunachal Pradesh are not as vulnerable as many in Central India to cede their identity in entirety. The new gods have given birth to syncretic religions, borrowing symbolism and ideas and traditions freely. If the shaman-based system of earlier beliefs have been shun, new “mediums” have emerged providing cure and miracles. The cult has banned sacrifices of animals for rituals but going vegetarian is just an ideal. People adapt to live complex lives with several gods, benefactors and belief systems.

The project is also yet to led to any political gains for the BJP thus far. Clan and tribe relations overpower most other dynamics. “No, people won’t accept our involvement in electoral politics yet,” says Kampa Taisam. In Miao town, the Arunachal Vikas Parishad is still a family enterprise that he, his brother and wife run.

The irony is that these people are incidental to the larger project of Hinduisation just as they remain incidental to the Central government’s strategic regulation of this frontier. Morphing lives, traditions and cultures of the Tangsa or thousands others living in villages, like New Chingsa, hardly bothers either’s strategy.