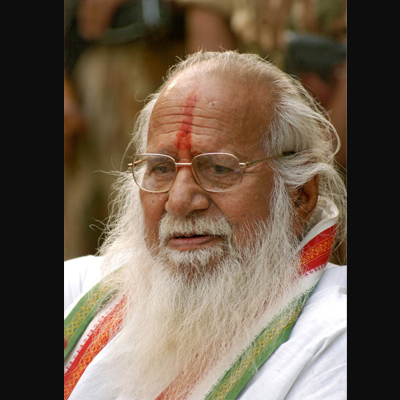 Senior Vishwa Hindu Parishad (VHP) leader Giriraj Kishore died here on Sunday evening following prolonged illness. He was 94. Born on February 4, 1920 in Etah district of Uttar Pradesh, Giriraj who was a school teacher in Morena, for taking an active role in the Ram Janmabhoomi agitation.

Prime Minister Narendra Modi, who is in Berlin on his way to Brazil for the BRICS Summit, condoled the passing away of Giriraj. Paying homage, the Prime Minister tweeted “Received the sad news of Acharya Giriraj Kishore ji’s demise…A life devoted to service of Motherland. I pay my homage.”

Rajnath Singh who offered his condolences to the senior leader tweeted, “Acharya Giriraj Kishore was associated with ‘Ram Janmabhoomi Andolan’ and he remained active till his last days. I offer my tributes to him.”

Wheelchair-bound Giriraj was suffering from prostrate cancer for some years, senior VHP functionary Rajinder Pankaj said. He joined the VHP in 1983 during the first Bharat Mata Yatra. He later served as the senior vice president of the VHP International wing and was now serving on the advisory board of the organisation.